You can pay with Apple Watch — just double-click the button next to the Digital Crown and hold the face of your Apple Watch near the contactless reader. A... 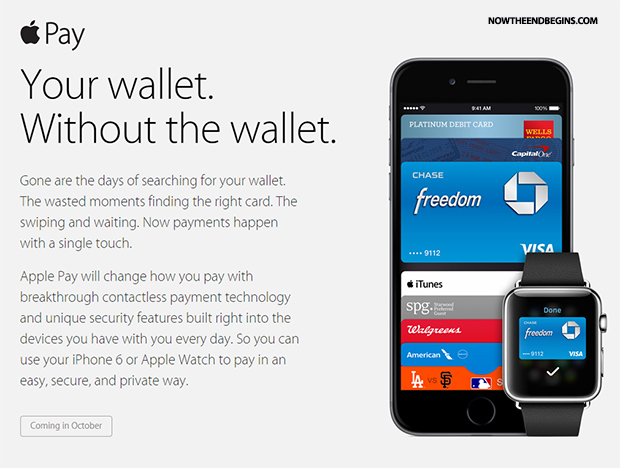 Apple Pay is the latest offering from tech giant Apple in Cupertino, California, and judging from the massive amounts of millions of pre-orders for the new iPhone 6 it will be a smashing success. The interesting new wrinkle that has to do with bible prophecy is the addition of the Apple Watch which will accept and process real-time credit card payments as it sits on the back of your hand.

Lost people are being indoctrinated to receive the Mark of the Beast and don’t even know it.

Funny thing about that, the bible says that the Mark of the Beast which will control all financial transactions will be located either in your forehead or in the back of your hand. Amazing coincidence, don’t you think? Apple Pay is not the Mark of the Beast, but it certainly is going to prepare lost people to feel no qualms of any kind about accepting the actual Mark when it comes during the Great Tribulation after the Rapture of the Church. 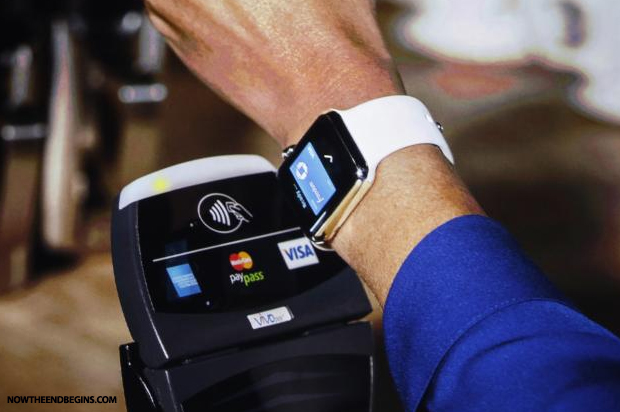 EXACTLY WHERE THE BIBLE SAID IT WOULD BE

One touch to pay with Touch ID. Now paying in stores happens in one natural motion — there’s no need to open an app or even wake your display thanks to the innovative Near Field Communication antenna in iPhone 6. To pay, just hold your iPhone near the contactless reader with your finger on Touch ID. You don’t even have to look at the screen to know your payment information was successfully sent. A subtle vibration and beep lets you know.

Double-click to pay and go. You can pay with Apple Watch — just double-click the button next to the Digital Crown and hold the face of your Apple Watch near the contactless reader. A gentle pulse and beep confirm that your payment information was sent.

Now, if you’re smart you will avoid all of the coming terror that the scriptures tell us are right around the corner. Click here to miss the Tribulation.