US Warships in Suez Canal, Threat of Egypt Military Coup

Just as reports were portraying a calmer atmosphere in Egypt and it seemed that life was going back to normal there, a swell of new protests has swept across... 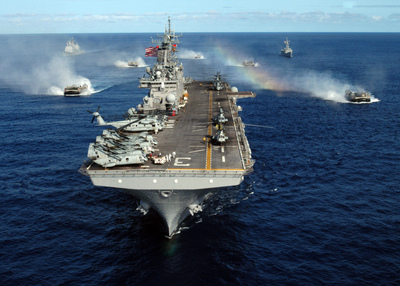 Bumped up a notch

Just as reports were portraying a calmer atmosphere in Egypt and it seemed that life was going back to normal, a swell of new protests has swept across the nation, re-igniting the furious demand that Mubarak be removed from power. The emerging chaos has prompted the US Military to move to action and take up strategic positioning in the Suez Canal.

“A fresh surge of popular anti-Mubarak protest ripping across Egypt Tuesday, Feb. 8 has brought the country closer to a military coup to stem the anarchy than at any time since the street caught fire on Jan. 25. Vice President Omar Suleiman warned a group of Egyptian news editors that the only choice is between a descent into further lawlessness and a military takeover in Cairo.

The arrival of US naval, marine and air forces in the Suez Canal’s Greater Bitter Lake indicated that the crisis was quickly swerving out of control.

DEBKAfile’s military sources report that the American force consists of the USS Kearsarge Expeditionary Strike Group of six warships. Helicopters on some of their decks are there to carry and drop the 2,200 marines of the 26th Marine Expeditionary Unit which has been bolstered by two special operations battalions.

Tuesday, the protesters mounted their biggest demonstrations of their campaign to oust Mubarak – in Cairo, Alexandria, the Delta Cities, the industrial belt around Mahalla-el-Kebir and the steel city of Heluan, shouting “Death to Mubarak!” and “Hang Mubarak!””  source: DEBKAfile

Though the presence of the US military may not do much to improve the already volatile situation in Egypt, it is incredibly important to protect the Suez Canal as well as nearby pipelines.  If shipments through the vital waterway are disrupted, or the flow of nearby pipelines cut off, the world will feel a major economic impact as energy prices would necessarily rise. Concerns were raised about the threat to the area after the massive explosion at a natural gas terminal in Egypt just days ago.

“As violence has broken out in Egypt, concern has turned to the risk of the blocking of the Suez Canal or nearby pipelines, which could pose a threat to world energy supplies.

More than two million barrels of oil and petroleum products traverse the Suez Canal daily, speeding the transit of crude and gas supplies that shippers would otherwise have to send around the Horn of Africa, prolonging delivery times and expenses. About 4.5 percent of global oil supplies flow through the canal and the Sumed pipeline, which connects the Red Sea with the Mediterranean.

About 14 percent of the global liquefied natural gas trade is shipped through the canal as well, providing critical supplies to Spain, and to a lesser extent, South Korea and the United States.”