Demonstrators storm Muslim Brotherhood HQ in Alexandria, pelt Port Said office with stones, and call for Egyptian president's ouster in Cairo after he is called "pharaoh," the new Mubarak... 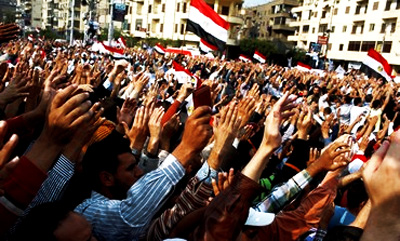 Egypt slowly starts to realize they traded one dictator for another

FLASHBACK: NTEB showed you the true nature of the Arab Spring and Obama’s connection to it as far back as May 20,2011

Demonstrators storm Muslim Brotherhood HQ in Alexandria, pelt Port Said office with stones, and call for Egyptian president’s ouster in Cairo after he is called “pharaoh,” the new Mubarak for seizure of new powers.

Egyptians protest in the streets of Alexandria after realizing they were duped into trading one dictator, Murbarak, for a much worse one in Morsi. PHOTO: REUTERS

Protesters stormed the headquarters of the Muslim Brotherhood’s party in Alexandria on Friday, throwing chairs and books into the street and setting them alight, after the Egyptian president granted himself sweeping new powers.

Supporters of Egyptian President Mohamed Morsi and opponents also threw stones at each other near a mosque in the city, Egypt’s second largest, a witness said.

Two cars had glass smashed as the clashes moved away from the area.

In Port Said, another port on the Mediterranean, hundreds of protesters gathered outside the Brotherhood’s Freedom and Justice party headquarters and pelted it with rocks. Some tried to storm it but did not enter, another witness said.

In Cairo, thousands demonstrated against the decree issued on Wednesday night.

Morsi’s decree exempting all his decisions from legal challenge until a new parliament was elected caused fury amongst his opponents on Friday who accused him of being the new Hosni Mubarak and hijacking the revolution.

Morsi’s aides said the decree was to speed up a protracted transition that has been hindered by legal obstacles but Morsi’s rivals were quick to condemn him as a new autocratic pharaoh who wanted to impose his Islamist vision on Egypt.

“Morsi a ‘temporary’ dictator,” was the headline in the independent daily Al-Masry Al-Youm and hundreds of protesters in Tahrir Square, the heart of the 2011 anti-Mubarak uprising, demanded Morsi quit, accusing him of launching a “coup”.

Buoyed by accolades from around the world for mediating a truce between Hamas and Israel, Morsi on Thursday ordered that an Islamist-dominated assembly writing the new constitution could not be dissolved by legal challenges.

Morsi, an Islamist whose roots are in the Muslim Brotherhood party, also gave himself sweeping powers that allowed him to sack the unpopular general prosecutor and opened the door for a retrial for Mubarak and his aides.

The president’s decree aimed to end the logjam and push Egypt, the Arab world’s most populous nation, more quickly on its democratic path, the presidential spokesman said.

“President Morsi said we must go out of the bottleneck without breaking the bottle,” Yasser Ali told Reuters.

The president said any decrees he issued while no parliament sat could not be challenged, moves that consolidated his powers but look set to polarize Egypt further, threatening more turbulence in a nation at the heart of the Arab Spring.

“The people want to bring down the regime,” shouted protesters in Tahrir, echoing one of the chants that was used in the uprising that forced Mubarak to step down.

The decree is bound to worry Western allies, particularly the United States, a generous benefactor to Egypt’s army, which effusively praised Egypt for its part in bringing Israelis and Palestinians to a ceasefire on Wednesday. 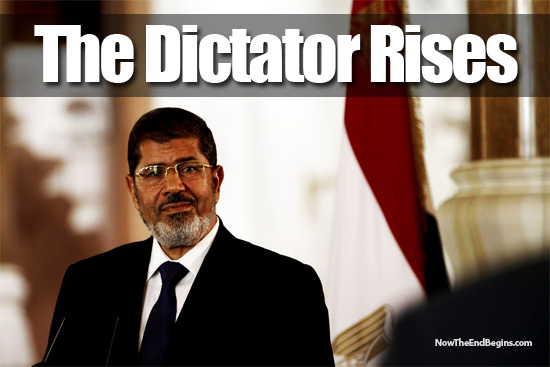 The West may become concerned about measures that, for example, undermine judicial independence. But one Western diplomat said it was too early to judge and his nation would watch how the decree was exercised in the coming days.

“We are very concerned about the possible huge ramifications of this declaration on human rights and the rule of law in Egypt,” Rupert Colville, spokesman for the UN Human Rights Commissioner Navi Pillay, said at the United Nations in Geneva.

“The decree is basically a coup on state institutions and the rule of law that is likely to undermine the revolution and the transition to democracy,” Mervat Ahmed, an independent activist in Tahrir protesting against the decree, said. “I worry Morsi will be another dictator like the one before him.”

Leading liberal politician Mohamed ElBaradei, who joined other politicians on Thursday night to demand the decree was withdrawn, wrote on his Twitter account that Morsi had “usurped all state powers and appointed himself Egypt’s new pharaoh”. source – JPost