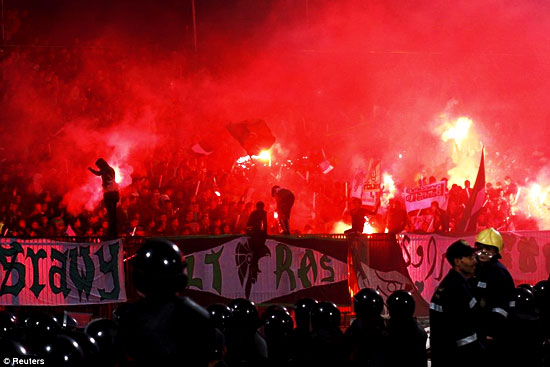 Rivalry: Pure hooliganism, and a bitter long-standing hatred between the two sets of fans, was initially blamed for the worst football riot in Egyptian history
by Geoffrey Grider February 2, 2012
NOW THE END BEGINS SHARE:

Rivalry: A bitter long-standing hatred between the two sets of fans, was initially blamed for the worst football riot in Egyptian history, but was it Pro-Mubarak forces?

Anxious Egyptians gathered to see whether friends and family had made it back safely after violence flared in the Mediterranean city of Port Said when local team Al-Masry beat Cairo’s Al-Ahly, the country’s most successful club, 3-1.

Security forces loyal to ousted Egyptian president Hosni Mubarak have been blamed for sparking the football riot. The final whistle prompted more than 13,000 home fans, armed with knives, iron bars and machetes, to storm the pitch and attack rival Al-Ahly players and their 1,200 supporters. 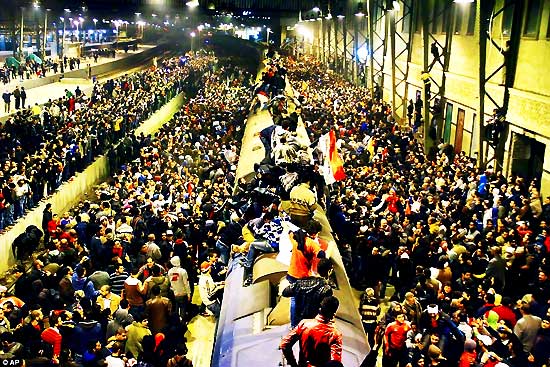 Packed onboard: Hundreds of Al-Ahly fans were greeted by friends and family on their return into Cairo station after the riot last night

Anger quickly spread across the country – and thousands of protesters turned up at the Ramses terminal to chant ‘Down with military rule’.

Al-Ahly goalkeeper Sharif Ikrami, who was injured in the clashes and said the entire team had now quit football, said dead bodies were carried past him in the changing room.

He said: ‘There were people dying in front of us. It’s over.

‘We’ve all made a decision that we won’t play soccer any more. We can’t think about it.’

Pure hooliganism, and a bitter long-standing rivalry of clashes between the two sets of fans, was initially blamed for the worst football riot in Egyptian history.

But speculation is now mounting that the riot was orchestrated by pro-Mubarak forces in revenge against Al Ahly’s ultra fans.

The ultras had used their experience confronting police at matches to play a significant role in defending Cairo’s Tahrir Square – the heart of the uprising – against Mubarak’s heavy-handed security forces.

Albadry Farghali, a member of parliament for Port Said, screamed in a telephone call to live television: ‘The security forces did this or allowed it to happen.

‘The men of Mubarak are still ruling. The head of the regime has fallen but all his men are still in their positions.’ Former Al-Ahly player Hani Seddik told the BBC: ‘I don’t think this is about football. These trouble-makers were not football fans. source – Daily Mail UK