The mainline Protestant United Church of Christ denomnation, with over 5,000 member churches across America, has agreed to sponsor the 9th Annual Gay Games which will take place in... 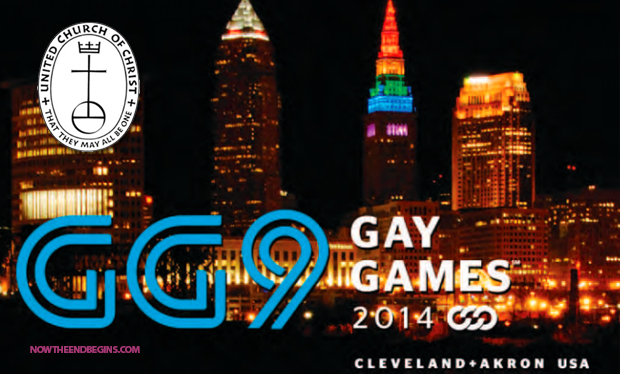 The great falling away continues unabated

The mainline Protestant United Church of Christ denomination, with over 5,100 member churches across America, has agreed to sponsor the 9th Annual Gay Games which will take place in Northeast Ohio August 9th – 16th.

“Times have changed,” said Tom Nobbe, executive director of Gay Games 9. “The last Gay Games in North America, in Chicago in 2006, had some corporate sponsors, but they were pretty limited.”

“Let no man deceive you by any means: for that day shall not come, except there come a falling away first…” 2 Thessalonians 2:3

The New York Times reports that the church and the organizers of Gay Games 9 said the sponsorship represents the first time that a religious denomination has agreed to be a major sponsor of the Gay Games, which began in San Francisco in 1982 and are, like an Olympics, held every four years. The sponsorship is at a level designated silver, for sponsors that pay $50,000 apiece; Ann Poston, the church’s director for communications, said its payment was about half cash and the rest in-kind donations like volunteer support.

The Times went on to say that there are 18 so-called faith partners of Gay Games 9, representing eight denominations, which in addition to the United Church of Christ include the Episcopal Church, the United Methodist Church, the Unitarian Universalist Church and a synagogue that is part of the Union for Reform Judaism.

More than 150 companies and organizations are supporting the 2014 Gay Games under the rubric of corporate sponsors, including the Cleveland Foundation, which has the top designation, presenting sponsor, at $250,000. Among the other familiar names are the Cleveland Clinic, Eaton, Ernst & Young, Forest City Enterprises, KeyBank, Marriott International, United Airlines, the Cleveland Cavaliers and the Cleveland Indians.