SIGN OF A CURSE: The Terrorizing Tactic Of Cross Burning Once Made Popular By The Ku Klux Klan Still Persists As A Potent Weapon Of Fear In 2019

If I wanted to share the gospel of Jesus Christ with you, I might knock on your door while the sun was shining, and politely invite you to come to church with me. After you had given your response, I would probably hand you a gospel tract and thank you for your time. This invitation would be extended regardless of your race, gender or other outward evidences of who you are. One the other hand, if I wanted to terrify you out of your mind, I would show up to your home at night, with a bunch of my friends who were all wearing hoods and robes, put a huge cross on your lawn and set it on fire. See the difference?

The cross, worn around the necks of millions of Christians is not a symbol of Christianity, it is a murder weapon devised by the KKK of two thousand years ago, the Romans.

Talk to a klansman about a cross burning, and they will correct you by saying they refer to that practice as a ‘cross lighting’, and when they do it they are merely ‘letting the light of Christ shine’ before the fellow man. Barry Black, a Klan leader who is appealing his Virginia cross burning conviction has described cross burning as “a very sacred ritual. “We don’t light the cross to desecrate it,” he told the Roanoke Times in 1999. “We light it to show that Christ is still alive.” The burning symbolizes the “burning away of evil.” Umm, yeah, wanna buy some oceanfront property in Kansas?

“Christ hath redeemed us from the curse of the law, being made a curse for us: for it is written, Cursed is every one that hangeth on a tree:” Galatians 3:13 (KJV)

Here’s another shocker. The cross, worn around the necks of millions of Christians is not a symbol of Christianity, it is a murder weapon devised by the KKK of two thousand years ago, the Romans. First century Christians used a fish as a symbol of their new found faith, not a cross. The bible says that the cross is a curse, and whoever hangs on one is cursed. The cross is where Jesus became a curse for us to save us, and thank God He did that, but guess what? He had to do it because of our dirty, rotten sins, and that’s shameful as Hebrews 12:2 says it is. So why on earth would you put something like that around your neck? And why would you plant one in someone’s front yard and set it on fire?

Only you can answer the first question, but I can take a stab at the second one.

IS THE KKK CHRISTIAN? NO, THE ONLY THING JESUS WANTS TO DO WITH THESE PEOPLE IS SAVE THEM

If I wanted to share the gospel of Jesus Christ with you, I might knock on your door while the sun was shining, and politely invite you to come to church with me. After you had given your response, I would probably hand you a gospel tract and thank you for your time. This invitation would be extended regardless of your race, gender, age or other outward evidences of who you are. One the other hand, if I wanted to terrify you out of your mind, I would show up to your home at night, with a bunch of my friends who were all wearing hoods and robes, put a huge cross on your lawn and set it on fire.

No person who has been washed clean by the shed blood of Jesus Christ on the cross at Calvary would ever, in a million years, have anything to do with a disgusting group like the KKK. The Ku Klux Klan, despite their claims, are not a “christian” group, and in fact are refuted by the bible in both testaments. If you’re a KKK member or supporter reading this article right now, you should repent of that junk, and ask God to forgive you for it. And stop calling yourself a Christian because you are nothing of the kind.

Why does the Ku Klux Klan burn crosses? They got the idea from a movie.

FROM TIMELINE: Looking eastward on a chilly Thanksgiving night in 1915, residents of Atlanta were met with an unfamiliar sight. Fifteen miles away the barren summit of Stone Mountain was illuminated by flames rising high into the blackness. The city, still reeling from a summer of anti-Semitic angst over the murder conviction and subsequent lynching of Jewish industrialist Leo Frank, would have been excused for thinking the giant burning cross was a work of Jewish retribution. In fact, it was the same violently anti-immigrant men who had committed the recent act of mob justice, and were now inaugurating the renewal of the Ku Klux Klan. It was the first time a burning cross had been used as a hate symbol in America. But the formerly innocuous act would soon become one of the hallmarks of the Klan—enduringly equated with intimidation, fear, and violence in the South and beyond. 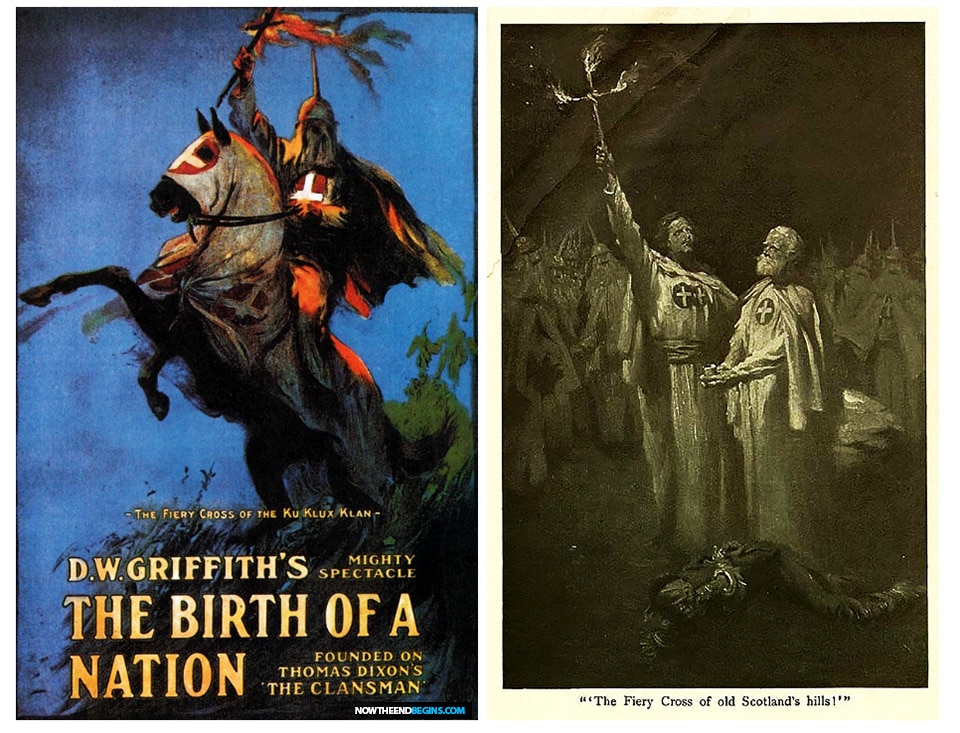 On the mountaintop that night were fifteen men led by William Joseph Simmons, a failed medical student and army veteran who had been inspired by the popular new movie, The Birth of a Nation. D.W. Griffith’s silent film, based on the 1905 novel The Clansman: A Historical Romance of the Ku Klux Klan, includes scenes depicting Klan members burning crosses before lynching a black man accused of murder. Simmons and company, fresh from committing their own act of extrajudicial justice, adopted the flaming cross symbol. But the origins of the practice were a far cry from the racist rabble rousing espoused by the Klan’s second coming.

Cross burning dates back to Medieval Europe, when Scottish clansmen would set fire to hillsides as a statement of military defiance or call to action for soldiers ahead of battle. Now, the KKK got a lot of inspiration from Scottish fraternities. The rituals, the hoods, the whole “clan” thing. But cross burning wasn’t part of the show until Birth of a Nation came out. (And who says violence in cinema has no effect?)

Since then, cross burning has become nearly synonymous with the KKK—its primary purpose being that of intimidation. (Of course, you don’t need a cross to do that.) But incorporating religious iconography can add a bit of mystery to menace.

Avowedly Protestant, the Klan has always claimed they were “lighting the cross” in celebration, not burning it maliciously. And to an extent the law has agreed. The 2003 Virginia v. Black Supreme Court decision struck down a state statute which classified cross burning as prima facie intimidation. The First Amendment case acknowledged the KKK’s ability to express “messages of shared ideology,” leaving the burden of proof on the state to prove intent to intimidate.

Today, membership in the KKK is down to around 5,000 nationwide. That’s a tiny fraction of its 1920s peak of 4 million, but no less problematic as hate continues to manifests itself in slightly more subtle ways. And if recent controversy over a planned North Carolina cross burning in March, 2017 is any indicator, the practice will likely persist for as long as there is hate to fuel it. READ MORE

The Birth of a Nation

History is usually written by the winners. But that wasn’t the case when The Birth of a Nation was released on February 8, 1915. In just over three hours, D.W. Griffith’s controversial epic film about the Civil War and Reconstruction depicted the Ku Klux Klan as valiant saviors of a post-war South ravaged by Northern carpetbaggers and immoral freed blacks. The film was an instant blockbuster. And with innovative cinematography and a Confederate-skewed point of view, The Birth of a Nation also helped rekindle the KKK.

Until the movie’s debut, the Ku Klux Klan founded in 1865 by Confederate veterans in the Democratic Party in Pulaski, Tennessee, was a regional organization in the South that was all but obliterated due to government suppression. But The Birth of a Nation’s racially charged Jim Crow narrative, coupled with America’s heightened anti-immigrant climate, led the Klan to align itself with the movie’s success and use it as a recruiting tool.