The Israeli military will on Monday deploy a battery of rocket interceptors from its "Iron Dome" system in the Tel Aviv region, a military spokesman said on Sunday. The... 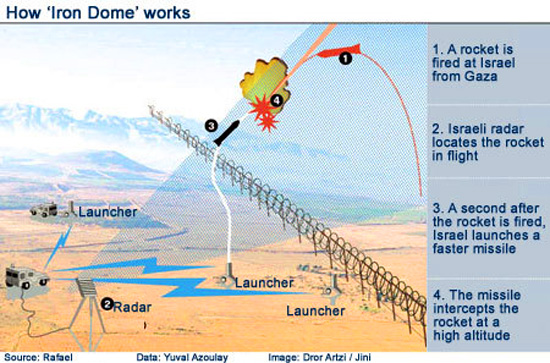 The Israeli military will on Monday deploy a battery of rocket interceptors from its “Iron Dome” system in the Tel Aviv region, a military spokesman said on Sunday.

“Iron Dome is being incorporated into the heart of the Israeli military. As part of this process, the system is deployed in different sites and will be in the Gush Dan region (of Tel Aviv) in the coming days,” he said in a statement that clarified the deployment would begin on Monday.

This deployment “is part of the annual training plan for this system”, he added.

The decision to site an Iron Dome battery at Tel Aviv comes amid heightened regional tensions and speculation about a possible Israeli attack targeting Iran’s controversial nuclear programme. Israel has denied that a decision has been taken to launch a pre-emptive strike on Iranian nuclear facilities.

The first battery of the unique multi-million-dollar Iron Dome system was deployed last March 27 outside the southern desert city of Beersheva, after it was hit by Grad rockets fired by Palestinian militants in the Gaza Strip.

On April 4, the system was also deployed around the southern port city of Ashkelon. The first of its kind in the world and still at the experimental stage, it is not yet able to provide complete protection, but it has successfully brought down several rockets fired from Gaza.

Designed to intercept rockets and artillery shells fired from a range of between four and 70 kilometres (three and 45 miles), Iron Dome is part of an ambitious multi-layered defence programme to protect Israeli towns and cities.