Scientists have stored audio and text on fragments of DNA and then retrieved them with near-perfect fidelity—a technique that eventually may provide a way to handle the overwhelming data... 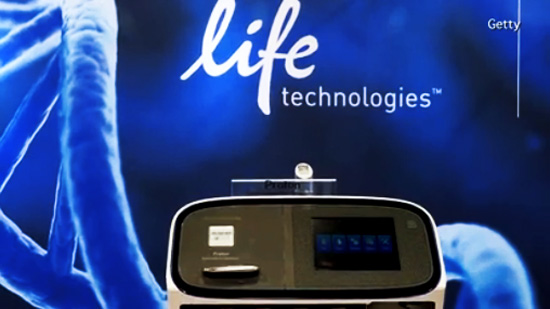 Scientists have used DNA stored audio and text on fragments of DNA and then retrieved them with near-perfect fidelity-a technique that may provide a way to handle data in the digital age. WSJ's Gautam Naik reports.
by Geoffrey Grider January 25, 2013
NOW THE END BEGINS SHARE:

Scientists have stored audio and text on fragments of DNA and then retrieved them with near-perfect fidelity—a technique that eventually may provide a way to handle the overwhelming data of the digital age.

Scientists have used DNA stored audio and text on fragments of DNA and then retrieved them with near-perfect fidelity-a technique that may provide a way to handle data in the digital age.

The scientists encoded in DNA—the recipe of life—an audio clip of Martin Luther King Jr.’s “I Have a Dream” speech, a photograph, a copy of Francis Crick and James Watson’s famous “double helix” scientific paper on DNA from 1953 and Shakespeare’s 154 sonnets. They later were able to retrieve them with 99.99% accuracy.

The experiment was reported Wednesday in the journal Nature.

“All we’re doing is adapting what nature has hit upon—a very good way of storing information,” said Nick Goldman, a computational biologist at the European Bioinformatics Institute in Hinxton, England, and lead author of the Nature paper.

Companies, governments and universities face an enormous challenge storing the ever-growing flood of digitized information, the videos, books, movies and songs sent over the Internet.

Some experts have looked for answers in biology. In recent years, they have found ways to encode trademarks in cells and poetry in bacteria, as well as store snippets of music in the genetic code of micro-organisms. But these biological things eventually die.

By contrast, DNA—the molecule that contains the genetic instructions for all living things—is stable, durable and dense. Because DNA isn’t alive, it could sit passively in a storage device for thousands of years.

Among today’s data-storage devices, magnetic tapes can degrade within a decade, while hard disks are expensive and need a constant supply of electricity to hold their information, creating huge need for power for the “data farms” behind cloud computing.

In their experiment, Dr. Goldman and his colleagues first downloaded onto a computer a 26-second clip of Dr. King’s “I Have a Dream” speech, the sonnets and the other things to be stored. The data was in normal computer code—a long string of ones and zeros.

DNA could hold vastly more information than the same surface volume of a disk drive—a cup of DNA theoretically could store about 100 million hours of high-definition video. While DNA-based storage remains a long way from being commercially viable—high cost is one major hurdle—the scientific barriers are starting to fall.

Last August, researchers at Harvard University reported in the journal Science the encoding of an entire 54,000-word book in strands of DNA.

“The experiments are very similar,” said George Church, a molecular geneticist at Harvard and senior researcher for the project reported in Science. “Because these are truly independent efforts, we’ve shown there’s a real field here rather than just one group.”

Both experiments encoded similar amounts of information and had roughly similar accuracy rates, according to Dr. Church.