Are You Ready To Share Your World With Humanoid Robots? They’re Here (VIDEO)

“We will sell Pepper in the United States within a year after gathering information in Japan,” Tomizawa said. “I won’t be surprised if Pepper sales will be half to... 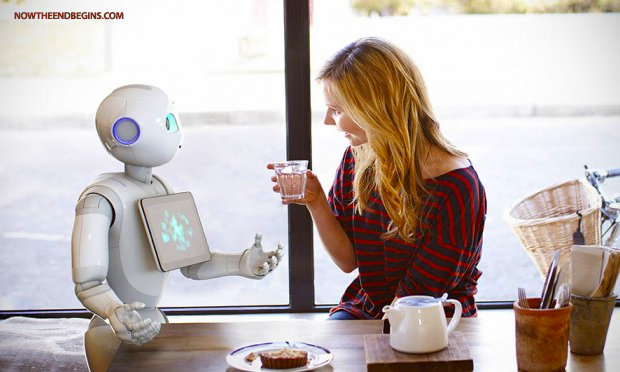 The coming singularity of man and machine is upon us

“There were giants in the earth in those days; and also after that, when the sons of God came in unto the daughters of men, and they bare children to them, the same became mighty men which were of old, men of renown.” Genesis 6:4

Billionaire Masayoshi Son will start selling his humanoid robots named “Pepper” at Sprint stores in the U.S. by next summer, part of SoftBank Corp.’s push to take the technology beyond factory floors.

The age of consumer-level humanoid robots has arrived

SoftBank also has received between 300 and 400 inquiries about Pepper from companies in finance, food service and education, Fumihide Tomizawa, chief executive officer of SoftBank Robotics, said yesterday. The 1.2 meter (4 foot) robot dances, makes jokes and estimates human emotions based on expressions. Pepper will go in sale in Japan in February for 198,000 yen ($1,900) while the company hasn’t set a U.S. price.

SoftBank, which paid $22 billion for control of Sprint last year, is investing in robotics as Japanseeks to double the value of domestic production to 2.41 trillion yen by 2020. SoftBank has developed an operating system that controls robots in the same way Google Inc.’s Android software runs smartphones, with the platform open to customization for use in construction, health care and entertainment industries.

“We will sell Pepper in the United States within a year after gathering information in Japan,” Tomizawa said. “I won’t be surprised if Pepper sales will be half to business and half to consumers.”

At the same time, a research team at the University of Tokyo has unveiled one of the fastest two-legged robots in the world that can reach speeds up to 4.2 kilometers per hour (2.6 mph).

While many robots are controlled using what is known as “zero moment point” dynamics to balance itself, the new robot uses a combination of a high speed camera and a stabilizing motor so that it can lean forward without tipping over, enabling it to run in a dynamic form, according to Prof. Masatoshi Ishikawa. The robot can even perform a somersault.

The leg length of the Actively Coordinated High-speed Image-processing Running Experiment System, or Achires, is about 14 centimeters long and it can take approximately six steps in a second. While it can only run for about 10 seconds now, the team is working on extending that time.