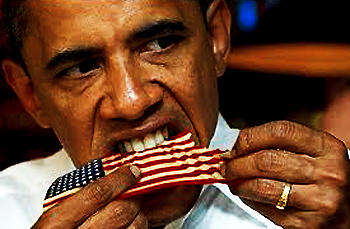 Since Barack Hussein Obama has occupied the President’s chair at 1600 Pennsylvania Avenue, there have been a number of Islamic Muslim terror attacks, both foreign and domestic, which have

resulted in the death of America citizens. The Fort Hood shootings, Benghazi, the Underwear Bomber, and now the latest one, the Boston Marathon Bombing, which resulted in 4 dead people and scores more injured with limbs blown off as well as a whole host of other injuries.

What do all these attacks have in common? Obama’s refusal to stand up in front of the American people and call it for what it is – Muslim terror attacks against America.

Here is what Mr. Obama had to say about the Muslim brothers who terrorized Boston for the past week:

“WASHINGTON (AP) — President Barack Obama declared Friday night that the capture of a second suspect in the Boston Marathon bombings “closed an important chapter in this tragedy.” But he acknowledged that many unanswered questions remain about the motivations of the two men accused of perpetrating the attacks that unnerved the nation.

“The families of those killed so senselessly deserve answers,” said Obama, who branded the suspects “terrorists.”

The president spoke from the White House briefing room after 10 p.m. on the East Coast, just over an hour after law enforcement officials apprehended 19-year-old Dzhokhar Tsarnaev.” source – The Blaze

Obama’s love for all things Islam

So Obama seems puzzled about the “motivations” of the two men who planned and carried out the bombings? Well, my my, anyone with internet access and the ability to read could tell you what the “motivations” of the Tsarnaev brothers was – Islamic terror attacks. So why is Obama unable and unwilling to call all these myriad attacks for what they are? Let’s look at a few of his quotes since 2008 and perhaps that will shed some light on the situation:

“The sweetest sound I know is the Muslim call to prayer” – Barack Hussein Obama, Cairo speech 2008

“The Future Must Not Belong To Those Who Slander The Prophet Of Islam” – Barack Hussein Obama, speech at the United Nations 2012

“I will stand with the Muslims should the political winds shift in an ugly direction” Barack Obama, in his book The Audacity of Hope

Do you know that the Obama administration has declared the Ft. Hood Shooting to be an act of workplace violence? Do you know that Obama has simply stopped talking about Benghazi and hopes you don’t notice? Do you read about anything other than basketball scores and the Kardashians?

Obama stood in front of the United Nations General Assembly and functionally addressed the entire free world when he proclaimed that anyone who “slanders the prophet Mohammad” has no part in the future of America.

Hey America, are you awake?…are you alive?…are you even out there? Our government has been hijacked by an Indonesian Socialist who stands for, stands with and promotes Islam in all its many disgusting forms. The wolf is in the hen house and making chicken nuggets out of our entire nation and way of life.

Do you care? The deed is being done…while you watch.

I will close with my prediction of an event that will occur before Obama’s second term becomes his third term. Ready? Here it is –

a Muslim flag will fly over the White House…and YOU, America, put it there.