"This was the first terrorist attack against the U.S. by ISIS." said Former deputy director of the CIA and CBS News senior security contributor, Mike Morell.... 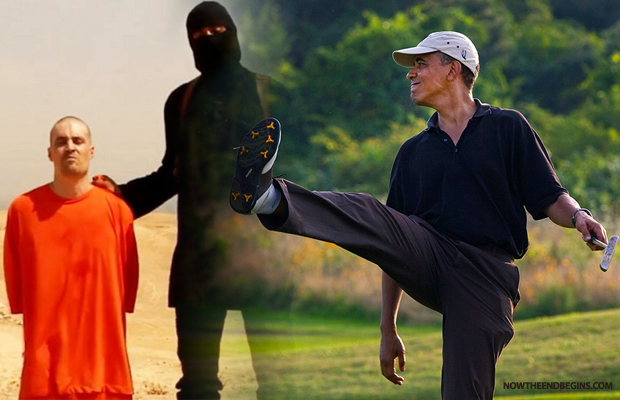 Nothing stops this president from playing golf and we mean nothing

Well, Obama’s statement started out characteristically weak but not too bad. Here is how CBS News reported it:

President Barack Obama said Wednesday that the entire world is “appalled” by the brutal death of American journalist James Foley, who was shown in a video released by the Islamic State of Syria and Iraq being beheaded. “No faith teaches people to massacre innocents,” Obama said in his statement. “No just God would stand for what they did yesterday and what they do every single day.” Obama stated that the United States will continue to do what it must to protect Americans following Foley’s death and confront these Islamic extremists. “We will be vigilant and we will be relentless,” adding that “justice will be done” to those that captured and killed Foley.

“This was the first terrorist attack against the U.S. by ISIS.” said Former deputy director of the CIA and CBS News senior security contributor, Mike Morell.

Then, immediately following that, he was rushed by the Presidential Motorcade off to….the Vineyard Golf Club. Kinda reminds you of a similar weak-given speech that Obama made about Benghazi before rushing off to a series of Democratic fundraisers in Las Vegas.

Former CIA Deputy Director Mike Morell called the beheading the “first act of terrorism against the US by ISIS”, and so it is. Benghazi also was a direct terrorist attack by Muslim terrorists which resulted in the deaths of 4 Americans. And it happened on the anniversary of 9/11. Obama has never retaliated for that day nor has he brought anyone to justice for Benghazi.

He will do exactly the same for dead American James Foley. Obama will do nothing. The Islamic State knows this, and is preparing many, many more high profile executions of Americans.

For that, and for the good of America, he should be removed from his office immediately.