In just a few months, Barack Obama's main conspirator Hillary Clinton is going to run for president. She is going to want you to continue to forget about the... 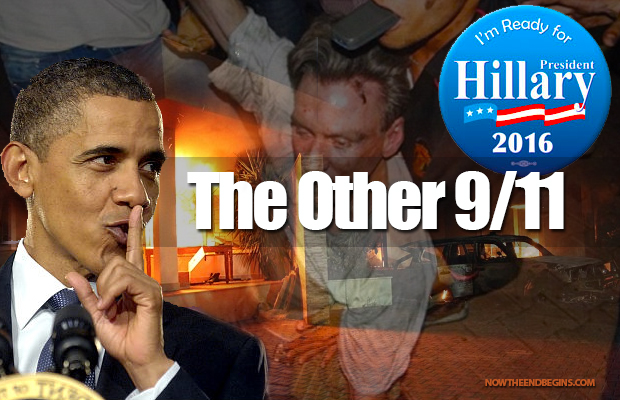 On September 11, 2012, the United States Consulate in Benghazi, Libya, was attacked and overrun by Islamic terrorists resulting in the subsequent murder of 4 American citizens. Diplomat Sean Smith, former US Navy SEALs Glen Doherty and Tyrone Woods, and US Ambassador Chris Stevens were all killed. To this day, no arrests have been made, no counter military attacked ordered, and not one soul has been brought to justice for this terror attack. And guess what? No one ever will. Hillary Clinton, Barack Obama and the main stream media would just like you to forget it ever happened.

After US Ambassador Christ Stevens was killed, he was then sodomized by Muslim terrorists repeatedly.

The very next day, Barack Obama, with Hillary Clinton by his side, gave a perfunctory, forced, tersely-worded sound bite for the press. There was no talk of American retaliation, no talk of sending in troops. There was nothing. Immediately following the sound bite, Obama boarded a plane and flew to Las Vegas for a multi-million dollar Democrat fundraiser.

Obama Described Murder of U.S. Ambassador Stevens As A ‘Bump In The Road’

Without focusing on the conspiracy aspect of these events – was an order to stand down given, did the Obama administration know and do nothing, etc – the known facts of what did happen are damning enough and they are these:

There is no national day of remembrance for the 4 dead Americans killed in these Muslim terror attacks, no acknowledgement from the Obama White House about anything related to that day. It is, as Obama famously said, just a “bump in the road” as far as he is concerned. The other 9/11 is a non-event.

In just a few months, Barack Obama’s main conspirator Hillary Clinton is going to run for president. She is going to want you to continue to forget about the “other 9/11”, and you will be attacked if you dare bring it up.

Hillary Clinton as president is nothing more than the Muslim occupier Barack Obama’s third term. To vote for her should be considered an act of treason.

The other 9/11 should never be forgotten.