The niblets are blended with various other substances including propyl gallate - an antioxidant preservative also used in a wide variety of lipsticks and shower gel.... 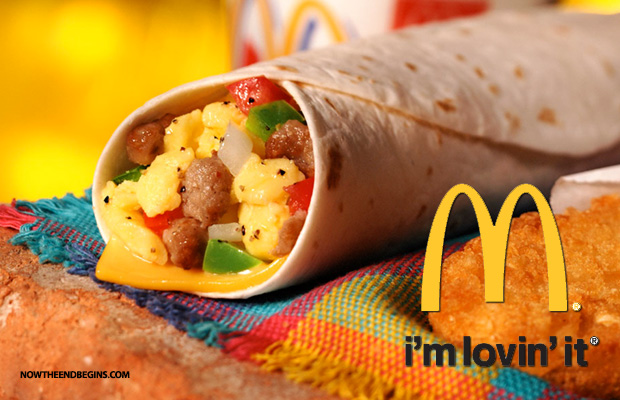 A McDonald’s Sausage Burrito certainly promises to fire you up for the day, with more than 100 ingredients including one chemical compound used in fireworks

A new behind-the-scenes video reveals that although the liquid egg in the sandwich originates from a farm in Michigan, it is mixed with twenty other components before flash frozen and reheated at restaurants.

Among the scrambled egg mix is carboxymethyl cellulose – a binding compound found in denture adhesives – and sodium benzoate, which is also used in fireworks to produce a whistling sound.

The finished breakfast meal contains 300 calories, 12 grams of protein and 790 milligrams of sodium – more than one third of the recommended daily intake. Click image for more on this story from Daily Mail UK

Both ingredients are commonly used in the processed food industry as a cheap way of thickening and preserving goods. The other components of the McDonald’s breakfast burrito include ‘pre-cooked sausage crumbles.’ Thankfully the brown-colored nodules do contain pork.

But the niblets are blended with various other substances including propyl gallate – an antioxidant preservative also used in a wide variety of lipsticks and shower gel.

After the egg and pork is combined, a layer of  processed American cheese is melted on top.

Soy lecithin – which some suggest triggers weight fluctuations and gastrointestinal problems – is added to the milk, cream, water and ‘cheese culture’ blend, in a bid to stop the cheesy slices from getting stuck together in storage.

Finally, the egg, sausage and cheese is wrapped up in a tortilla wrap by chefs. In a bid to extend the shelf life of the flour product, a number of preservatives are added during the factory baking process.

And hey presto, a McDonald’s Sausage Burrito is served.

The finished breakfast meal  contains 300 calories, 12 grams of protein and 790 milligrams of sodium – more than one third of the recommended daily intake.