House Minority Leader Rep. Nancy Pelosi (D-Calif.) said Thursday she has no idea why the Obamacare website isn’t working and that it’s not her “responsibility.”... 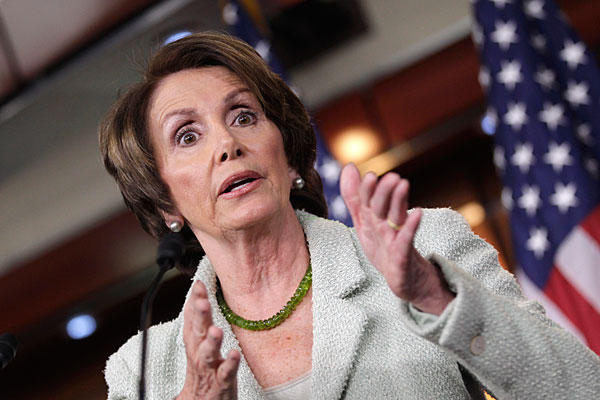 If you needed any further proof of the lunacy and insanity that runs our federal government, we invite you to watch this video all the way through. Watch as Nancy Pelosi seems completely unstable and about to come apart at any moment as she falls apart under the “intense pressure” of easy, softball questions from Far-Left Liberal and Obamacare supporter Jon Stewart.

The Blaze: House Minority Leader Rep. Nancy Pelosi said Thursday she has no idea why the Obamacare website isn’t working and that it’s not her “responsibility.”

Stewart, who has made no secret of his liberal leanings, didn’t cut Pelosi any slack as he repeatedly pushed her for answers to a problem that has dogged President Obama and his allies for months.

“Why is it so hard to get a company to execute that competently?” Stewart said.

“Oh, well, let me get the House minority leader here, I can ask her. Hold on — what do you mean you don’t know? How do you not know?” Stewart asked.

“That’s not my responsibility,” Pelosi said. “But I will say this, we worked very hard to honor our responsibility to pass the bill that honors the vowels of our founders: life, a healthier life, liberty to pursue your happiness.”

She added that the health care law’s rollout has been “shameful,” but maintained that the policy was good.

Pelosi was a fierce supporter of the Affordable Care Act during her tenure as House speaker, famously telling reporters once that Congress would have to “pass the bill to find out what’s in it.”

Stewart also asked Pelosi for her take on the trend of Hill staffers leaving to work for lobbying firms, creating an environment that practically invites “quid pro quo” legislation.

Pelosi tried to say the issue is more common with the executive branch, but Stewart corrected her by pointing out that former members of her staff have indeed gone on to work for lobbying firms and government contractor groups.

“But folks in your office have gone on to work for Boeing and many other contractors,” Stewart said.

“I do,” Stewart shot back, again to peals of laughter.

Approximately 28 current and former Pelosi staffers have gone through the so-called “revolving door” between Congress and lobbying firms, according to Open Secrets. source – The Blaze