CRIF said in a statement that "it fears this attack" is connected to the days of violent protests from Asia to Africa against the U.S.-produced film "Innocence of Muslims,"... 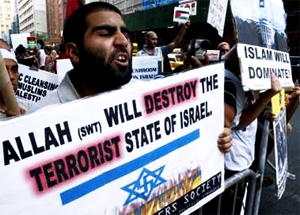 Now it looks like the Muslim terrorists have reached France.
by Geoffrey Grider September 19, 2012
NOW THE END BEGINS SHARE:

PARIS (AP) — A French news agency is reporting that four people were injured when a small package bomb exploded inside a kosher grocery store in a Paris suburb.

Now it looks like the Muslim terrorists have reached France. (file photo)

The Sipa news agency says that the small explosion was set off by two hooded people dressed in black who entered the store around midday and put a package inside, citing an unnamed police official and a Jewish organization.

The two fled after throwing a rock through the shop’s window shortly before the explosion, the police official said. He spoke on condition of anonymity because he was not allowed to speak publicly about the investigation.

The official said the injured people are being treated for wounds to their arms and legs from the explosion and broken glass.

The attack took place in Sarcelles, a suburb about 20 kilometers (12 miles) north of Paris.

A French Jewish umbrella organization, CRIF, said in a statement that “it fears this attack” is connected to the days of violent protests from Asia to Africa against the U.S.-produced film “Innocence of Muslims,” which ridicules Prophet Muhammad. source – Yahoo News