Muslim anger is not limited to Pakistan or the Innocence of Muslims film, as the Iranian president has lashed out at the West over an anti-Islam film produced in... 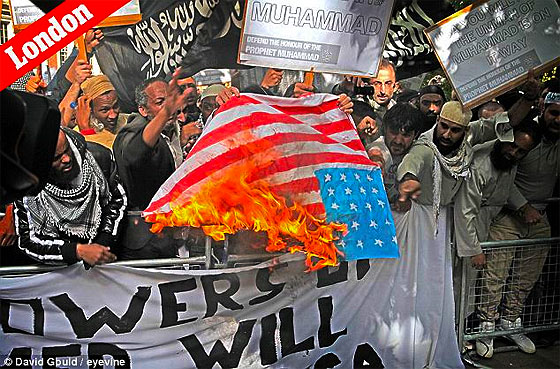 This is what a "day of love" looks like to Muslims. Death, fires, riots and property destruction are the tools they use for conflict resolution.
by Geoffrey Grider September 21, 2012
NOW THE END BEGINS SHARE:

Pakistani officials say at least 15 people have been killed and more than 160 wounded in clashes between police and people protesting a film that denigrates Islam’s Prophet Muhammad.

This is what a “day of love” looks like to Muslims. The riots by Muslim terrorists spread around Asia, the MIddle East and parts of Europe today.

Officials at two different hospitals, Seemi Jamali and Aftab Channar, say 12 were killed and 82 wounded Friday in the southern port city of Karachi.

Police official Bashir Khan says three others were killed and 61 wounded in the northwest city of Peshawar. Hospital official Tanveer Malik says 25 people were wounded in the capital, Islamabad.

The first confirmed death was Mohammad Amir, a driver for a Pakistani television station, was killed when bullets hit his vehicle in the northwest city of Peshawar, said Kashif Mahmood, a reporter for ARY TV who was also sitting in the car at the time.

Security forces clashed with demonstrators in several other cities in Pakistan on a holiday declared by the government so people could rally against the anti-Islam video.

Thousands of people protested in several other countries, some of them burning American flags and effigies of President Barack Obama.

Pakistan has experienced nearly a week of violent rallies against the film in which three people have died. The government declared Friday to be a national holiday – ‘Love for the Prophet Day’ – and encouraged people to protest peacefully.

As in past days, most of the protests were led by hardline Islamist groups, and the turnout was relatively small given Pakistan’s population of 190 million people. At least five protesters were hurt, a doctor at the city’s main hospital said. The ARY television station said an employee had been killed.

The cinema where police opened fire was one of two in Peshawar that several hundred protesters ransacked and set ablaze. They also torched the city’s chamber of commerce. Police beat back demonstrators with batons and firing tear gas and bullets.

In Peshawar, at least 11 people were wounded, including four who were shot, said police officer Imtiaz Khan. They included eight protesters and three policemen.

Near the capital, Islamabad, protesters set fire to a motorway toll booth. The previous day, about 1,000 stone-throwing protesters clashed with police as they tried to force their way to the U.S. embassy.

The government shut down mobile phone services in more than a dozen cities as part of security arrangements ahead of protests expected on Friday to prevent militants from using phones to detonate bombs.

An Interior Ministry official says the service is blocked in at least 15 cities, including Karachi, Lahore and Islamabad. The service is scheduled to be resumed at 6pm local time.

Though there were no reports of bombs in Pakistan, Thai firemen and rescue workers try to put off the fire caused by the blast of a bomb hidden in a pickup truck in Saiburi district of Pattani province, southern Thailand. Suspected Muslim insurgents have detonated a car bomb in Thailand’s violence-prone south, killing five people and wounding a dozen others.

In a bid to tamp down public rage over the anti-Islam film, the American embassy in Islamabad is spending $70,000 to air an ad on Pakistani television that features President Barack Obama and Secretary of State Hillary Rodham Clinton denouncing the video.

The advertisement comes as more protests are planned in Muslim countries across the globe, with a ‘special day of love’ for the Prophet Mohammed scheduled in Pakistan.

Officials in the country are bracing themselves for potentially violent protests, blocking all cell phone service in major cities to prevent militants from using phones to detonate bombs.

The anger is not limited to Pakistan or the Innocence of Muslims film, as the Iranian president has lashed out at the West over an anti-Islam film produced in the United States and the publication of caricatures of the Prophet Muhammad by a French satirical weekly.

Mahmoud Ahmadinejad said at a military parade that ‘in return for (allowing) the ugliest insults to the divine messenger, they – the West – raise the slogan of respect for freedom of speech.’ Ahmadinejad asserted that this shows a double standard and ‘is clearly a deception.’

The protests stem from the anger caused by the American-made film which have left at least 30 people dead, including two in Pakistan.

The U.S. and French embassies were closed on Friday in Jakarta, capital of Indonesia, which has the world’s biggest Muslim population, and diplomatic missions in the Afghan capital, Kabul, were on lock-down. source – Daily Mail UK