Under carefully controlled conditions we examined the Chicken McNuggets under a high-powered digital microscope, expecting to see only processed chicken bits and a fried outer coating.... 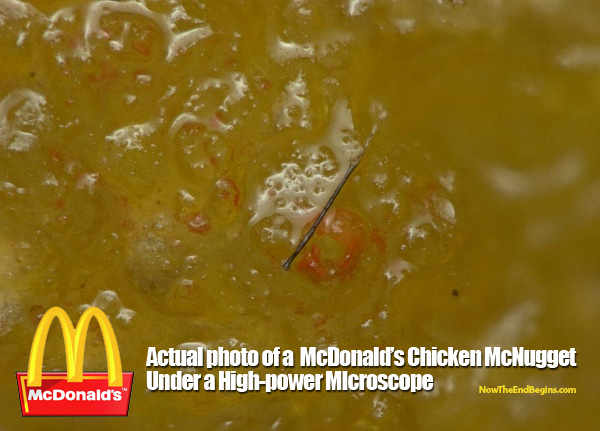 From Natural News: Today we announce the first investigation conducted at the Natural News Forensic Food Laboratory, the new science-based research branch of Natural News where we put foods under the microscope and find out what’s really there. 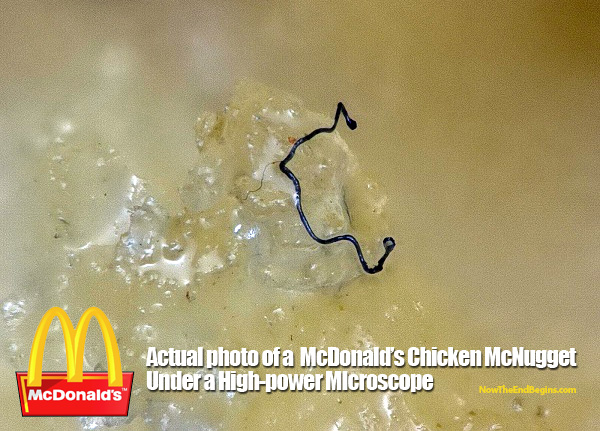 Earlier today I purchased a 10-piece Chicken McNuggets from a McDonald’s restaurant in Austin, Texas. Under carefully controlled conditions, I then examined the Chicken McNuggets under a high-powered digital microscope, expecting to see only processed chicken bits and a fried outer coating.

But what I found instead shocked even me. I’ve seen a lot of weird stuff in my decade of investigating foods and nutrition, but I never expected to find this…

As the following photos show, the Chicken McNuggets were found to contain strange fibers that some people might say even resemble so-called “Morgellon’s.” We found dark black hair-like structures sticking out of the nugget mass, as well as light blue egg-shaped structures with attached tail-like hairs or fibers.

These are shown in extreme detail in the photos below, taken on August 15, 2013 at the Natural News Forensic Food Lab. The actual Chicken McNugget samples used in these photos have been frozen for storage of forensic evidence.

We also found odd red coloring splotches in several locations, as well as a spherical green object that resembles algae.

We are not claiming or implying that these objects in any way make McDonald’s Chicken McNuggets unsafe to consume. We do, however, believe that this visual evidence may warrant an FDA investigation into the ingredient composition of Chicken McNuggets.

In particular, where are the hair-like structures coming from? This is especially important to answer, given that chickens do not have hair. Is there cross-species contamination in the processing of Chicken McNuggets? This question needs to be answered. source – Natural News