Look What Message The Vatican Papal Plane Is Proclaiming

This seal proclaims that the One World Religion spoken up by Daniel the prophet and picked up again in the book of Revelation is indeed the goal of this... 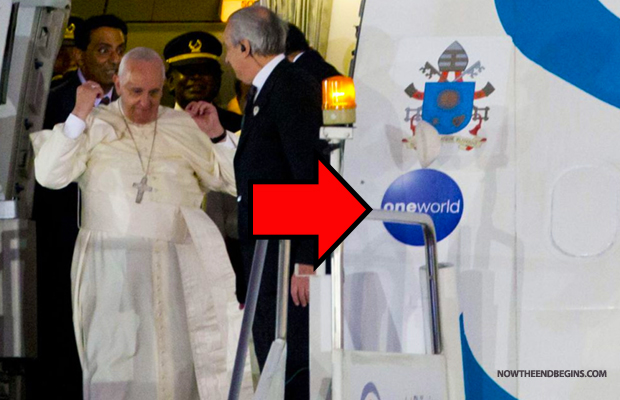 “And I beheld another beast coming up out of the earth; and he had two horns like a lamb, and he spake as a dragon.” Revelation 13:11 (KJV)

Pope Francis has an official papal plane that transports him across the world, provided to him by the Vatican. As such, his plane bears the official Vatican seal, their coat of arms. (The Vatican does not own this plane, but when the Pope flies on it, it is reserved exclusively for him and his entourage.) Directly under the Vatican seal, is a seal of another sort. This seal proclaims that the One World Religion spoken up by Daniel the prophet and picked up again in the book of Revelation is indeed the goal of this pope and of the Vatican system. It is just by coincidence, of course, that the Vatican loves to use One World Air to ferry the Pope around in though, I’m sure.

When Francis steps off his plane, wearing his flowing white dress, the Vatican wants you to know and understand that their goal and mission is to bring the entire world together under the banner of Roman Catholicism and thereby create the One World Religion that the pope will be the False Prophet of. They know that their time is now, no more reason to hide their true intentions or beat around the bush.

“And whereas thou sawest the feet and toes, part of potters’ clay, and part of iron, the kingdom shall be divided; but there shall be in it of the strength of the iron, forasmuch as thou sawest the iron mixed with miry clay. And as the toes of the feet were part of iron, and part of clay,so the kingdom shall be partly strong, and partly broken. And in the days of these kings shall the God of heaven set up a kingdom, which shall never be destroyed: and the kingdom shall not be left to other people, but it shall break in pieces and consume all these kingdoms, and it shall stand for ever.” Daniel 2:41,42,44 (KJV)

With each passing day we get closer and closer to the time of the end. We are living in the last days of human history right before the event which will drive the world to it’s knees, the time of Jacob’s trouble.

But we who are saved are waiting for something else quite different, which will happen first.