It was the day of the “Drawing Muhammad” contest in Texas, and CNN had an interview with Pamela Geller, who was the creator of this event. ... 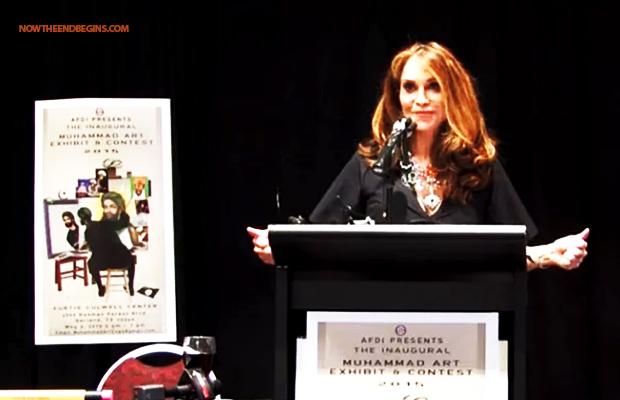 As I was sitting in the waiting room, waiting for my husband to have his PET Scan, I was subjected to the liberal rubbish proceeding from the mouths of CNN commentators.

“For the wrath of God is revealed from heaven against all ungodliness and unrighteousness of men, who hold the truth in unrighteousness; Because that which may be known of God is manifest in them; for God hath shewed it unto them.For the invisible things of him from the creation of the world are clearly seen, being understood by the things that are made, even his eternal power and Godhead; so that they are without excuse:Because that, when they knew God, they glorified him not as God, neither were thankful; but became vain in their imaginations, and their foolish heart was darkened. Professing themselves to be wise, they became fools.” Romans 1:18-22 (KJV)

EDITOR’S NOTE: In 1920’s Germany, everyone watched Adolf Hitler rise to power and yet no one did anything about it. Hitler didn’t happen over night, he was very patient to wait all the way from the 1921 beer garden meetings to 1933 when he was elected as Chancellor. In 2015 America, we are watching the slow but very steady rise of the influence of Islam and Sharia. Pamela Geller is working to expose this and to create a much-needed dialogue to prevent the Islamization of America.

At times I had to literally bite my tongue when I wanted so badly to say what I thought of their drivel to the other people waiting. But alas, the Lord helped me hold my tongue.

It was the day of the “Drawing Muhammad” contest in Texas, and CNN had an interview with Pamela Geller, who was the creator of this event. They showed sound bites of Pamela explaining that the whole reason for her being prompted to schedule this event, was to show people the importance of holding onto our first amendment right to freedom of speech.

After the interview, the commentators called Pamela all sorts of disparaging names – mostly referring to her as an Islamophobe. They insisted that Pam Geller hated all Muslims and that she was a lightning rod. By this time, I was gritting my teeth and doing a few eye rolls.

Today, I watched a liberal on Fox News talking about Islamophobia. The points she made were so ridiculous and had not any semblance to reality — I wanted to scream! She said that profiling Muslims would be like profiling all Jews or Buddhists or Hindus. WHAT?? When is the last time you heard of any of these religious groups beheading or slaughtering people??

Seriously, what is wrong with these liberal minds? I’m at a loss here. Do they really believe the inane words coming out of their mouths? Sometimes I think that they are somehow programmed, and their brains are just not working!

Why are these people so adamant about defending Muslims? Why would Pamela Geller be called a lightning rod? Have you seen the ignorant cartoons or our Lord Jesus all over the internet? It goes right through me when I see these depictions of the Lord of Glory – our Savior!!

But the liberals know that Christians do not behead people for drawing these horrible pictures. As a matter of fact, Jesus would say to forgive them, because they don’t know what they are doing.

Well, it feels good to get this off my chest. I know that we must pray for these lost people. Sometimes it is just so frustrating.