The network and the Robertson family announced Friday that Phil will still be part of the series -- and since he didn't miss any filming, his temporary suspension will... 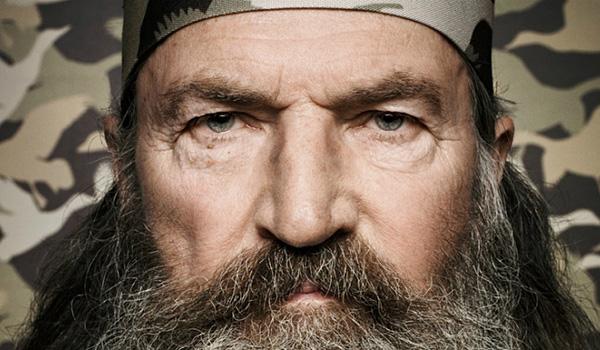 CLICK IMAGE FOR AN IMPORTANT MESSAGE FROM THE ROBERTSON FAMILY
by Geoffrey Grider December 27, 2013
NOW THE END BEGINS SHARE:

Hollywood Reporter – Phil Robertson, the patriarch of A&E’s Duck Dynasty clan who was suspended from his hit reality series on Dec. 18 following some incendiary comments about gay people, won’t be put on hiatus after all.

RELATED STORY: The Dark Side Of Duck Dynasty Exposed

The network and the Robertson family announced Friday that Phil will still be part of the series — and since he didn’t miss any filming, his temporary suspension will have no effect on the upcoming fifth season.

An A&E statement to The Hollywood Reporter read:

As a global media content company, A+E Networks’ core values are centered around creativity, inclusion and mutual respect. We believe it is a privilege for our brands to be invited into people’s homes, and we operate with a strong sense of integrity and deep commitment to these principles.

CLICK IMAGE FOR AN IMPORTANT MESSAGE FROM THE ROBERTSON FAMILY

That is why we reacted so quickly and strongly to a recent interview with Phil Robertson. While Phil’s comments made in the interview reflect his personal views based on his own beliefs and his own personal journey, he and his family have publicly stated they regret the “coarse language” he used and the misinterpretation of his core beliefs based only on the article. He also made it clear he would “never incite or encourage hate.” We at A+E Networks expressed our disappointment with his statements in the article and reiterate that they are not views we hold.

But Duck Dynasty is not a show about one man’s views. It resonates with a large audience because it is a show about family … a family that America has come to love. As you might have seen in many episodes, they come together to reflect and pray for unity, tolerance and forgiveness. These are three values that we at A+E Networks also feel strongly about.

We will also use this moment to launch a national public service campaign (PSA) promoting unity, tolerance and acceptance among all people, a message that supports our core values as a company and the values found in Duck Dynasty. These PSAs will air across our entire portfolio.

In addition, an A&E source says the family and the network are going to work together to promote tolerance.

Robertson’s comments in GQ magazine, which included the 67-year-old likening homosexuality to “bestiality,” prompted an almost immediate announcement from A&E.

“We are extremely disappointed to have read Phil Robertson’s comments in GQ, which are based on his own personal beliefs and are not reflected in the series Duck Dynasty,” read a network statement at the time. “His personal views in no way reflect those of A+E Networks, who have always been strong supporters and champions of the LGBT community. The network has placed Phil under hiatus from filming indefinitely.”

A&E’s swift reaction to the comments, praised by some, prompted objections from many fans of the show. Prior to his reinstatement, a petition started by Christian fans gathered north of 200,000 signatures demanding he be put back on the series. The organizers of the petition, IStandWithPhil.com, praised his reinstatement, though questioned if their voices had been heard.

“Despite our celebration, we remain uncertain of A&E’s true intent. Today, in the network’s statement of their core values – centered on ‘creativity, inclusion, and mutual respect’ – Faith Driven Consumers are left wondering whether A&E considers us to be a part of America’s rich rainbow of diversity,” said a satement from Chris Stone, founder of Faith Driven Consumer.  “Do they also now embrace the biblically based values and worldview held by the Robertson family and millions of Faith Driven Consumers?”

Robertson and the rest of his family have stood by the controversial comments that prompted the media furor, putting the future of A&E’s top-rated series in question.

On Sunday, Robertson delivered a sermon at his West Monroe, La., church. “I will not give or back off from my path,” he told the crowd — though he did seem to soften a bit, adding, “I love all men and women. I am a lover of humanity, not a hater.”

The political fallout has also been significant. Following initial calls to action from GLAAD, people from both sides of the political spectrum have weighed in on Robertson’s comments and suspension. It’s been a popular topic of debate on Fox News, and Louisiana’s Gov. Bobby Jindal was among the first to come to Robertson’s defense.

The Robertsons’ somewhat vague initial reaction to Phil’s removal — “We cannot imagine the show going forward without our patriarch at the helm” — prompted many to suggest that the cast would not continue filming. But the Robertsons also recently re-signed to stay on board A&E’s top-rated series. After settling a months-long salary standoff in August, A&E signed the entire Robertson clan to a multiyear deal worth more than $200,000 per episode.

For its part, A&E did little else in the wake of Robertson’s comments beyond the initial suspension. Encores of the series have continued to air, including a marathon on Christmas Day. Canceling or delaying the Jan. 15 season-five premiere never seemed to be on the table.

Duck Dynasty is a huge asset for A&E. In addition to being the top-rated reality program on cable, second across all of cable to only The Walking Dead with an average 13.4 million viewers and 7.6 million adults 18-49 in live-plus-7 ratings, Duck Dynasty has multiple brand tie-ins. Duck Dynasty gear is available in retailers across the U.S., including Walmart, Sears and Cracker Barrel restaurants.

The entire Robertson family has been on hiatus for duck hunting season, a contractual stipulation, which continues through Jan. 26 in their native Louisiana. source – Hollywood Reporter