If Chick-Fil-A is serious about their pledge to stop holding hands with divisive anti-LGBTQ activists, then further transparency is needed regarding their deep ties to organizations like Focus on the Family, which exist purely to harm LGBTQ people and families. Chick-Fil-A investors, employees, and customers can greet today’s announcement with cautious optimism, but should remember that similar press statements were previously proven to be empty. In addition to refraining from financially supporting anti-LGBTQ organizations, Chick-Fil-A still lacks policies to ensure safe workplaces for LGBTQ employees and should unequivocally speak out against the anti-LGBTQ reputation that their brand represents.

One of the nation’s largest gay advocacy organizations GLAAD is greeting Chick-Fil-A’s divestment from Christian charities like the Salvation Army with tepid praise and further demands, including an “unequivocal” denunciation of the brand’s history and values.

Back on November 7th, Chick-fil-A CEO Dan Cathy posted a very cryptic and now seemingly prophetic post to his LinkedIn accounted entitled “The Art of Change“, and I hope you will click the link to read it for yourself. In that post, he says things like “In business, change is inevitable.” and “I give up control so that others can flourish in their roles.” And a little more than a week after he posted about change, he stunned the world by announcing that Chick-fil-A would give into the demands of the LGBTQ+ Mafia GLAAD, in the vain hope that would appease their anger. Well, Dan, appeasement has worked just about as good for Chick-fil-A as it did for Neville Chamberlain in WWII. GLAAD is now doing what all blackmailers and extortioners do, demanding more, as I predicted yesterday would happen.

Dan Cathy thought he could win the war by ceding the battle, but he was dead wrong. When he gave into the LGBTQ+ Mafia, he only emboldened them and made them stronger. Worse than that, he is losing the support of his Christian base who are unbelievably mad at him feeling betrayed and rightly so. God blessed Chick-fil-A to a very high degree because they had the guts to not only close on Sunday but to stand against the wickedness of the LGBTQ+P for Pedophile Movement. But now that Chick-fil-A has given in to GLAAD and the radical Left, will God continue to bless them as He had done previously? That remains to be seen, and pardon the pun, but Chick-fil-A should not be counting their chickens before they hatch. Especially the ones that are dead on arrival. 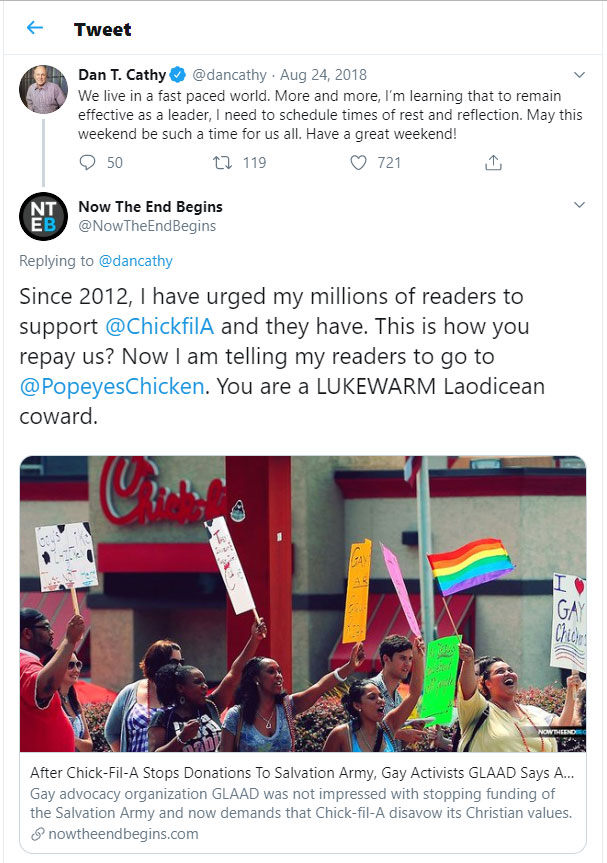 I am steaming mad at Dan Cathy, because for years this site has supported Chick-fil-A through thick and thin, and we encouraged our readers all over America to support them as well. Support them they did, and in record numbers. Now I say it’s time to stop eating at Chick-fil-A, and maybe go over to Popeye’s and see what the fuss is all about over there. At the very least I will get a good chicken sandwich and won’t have to worry about looking like a fool when I’m done eating it. So bye, bye for now, Chick-fil-A, let me know when  you repent.

GLAAD: Chick-Fil-A Cave Not Enough, Must Disavow Itself

FROM BREITBART: GLAAD (whose name is an acronym for its former title, “Gay & Lesbian Alliance Against Defamation”) demanded “safe workplaces for LGBTQ employees” and an apparent denunciation of the Christian ministry Focus on the Family, responding to Chick-Fil-A’s decision to stop donating to the Salvation Army’s Angel Tree program for needy children and the Fellowship of Christian Athletes, which serves historically black colleges and universities (HCBUs).

If Chick-Fil-A is serious about their pledge to stop holding hands with divisive anti-LGBTQ activists, then further transparency is needed regarding their deep ties to organizations like Focus on the Family, which exist purely to harm LGBTQ people and families.

Chick-Fil-A investors, employees, and customers can greet today’s announcement with cautious optimism, but should remember that similar press statements were previously proven to be empty.

In addition to refraining from financially supporting anti-LGBTQ organizations, Chick-Fil-A still lacks policies to ensure safe workplaces for LGBTQ employees and should unequivocally speak out against the anti-LGBTQ reputation that their brand represents.

“We’re saddened to learn that a corporate partner has felt it necessary to divert funding to other hunger, education and homelessness organizations — areas in which The Salvation Army, as the largest social services provider in the world, is already fully committed,” the organization said in a statement Monday afternoon.

The Salvation Army said that it serves more than 23 million individuals a year, including those in the queer community. The group said that it believes it is “the largest provider of poverty relief to the LGBTQ+ population.”

“When misinformation is perpetuated without fact, our ability to serve those in need, regardless of sexual orientation, gender identity, religion or any other factor, is at risk. We urge the public to seek the truth before rushing to ill-informed judgment.”

The move also sparked backlash from conservatives, who characterized the decision as a “cave” rather than a prudent olive branch. Christian satire site The Babylon Bee mocked the company’s management with a tongue-in-cheek post titled “Chick-Fil-A Trades Adoring Christian Fans For Outraged Mob That Won’t Be Appeased Until Their Every Demand Is Met.”

“Chick-fil-A has sacrificed its Christian fans in favor of an outraged mob that will stop at nothing to destroy them,” the parody article reads. “[CEO Dan] Cathy said the Christian fans have been great, but it’s boring just having loyal fans who support you through thick and thin, and he’d much rather have fans who stage die-ins and cancel you when you don’t cave in.” READ MORE