Tea Party Downgrade? In the wake of a bruising battle over the debt ceiling and now a first-ever credit downgrade, Democrats have launched a salvo of rhetorical attacks on... 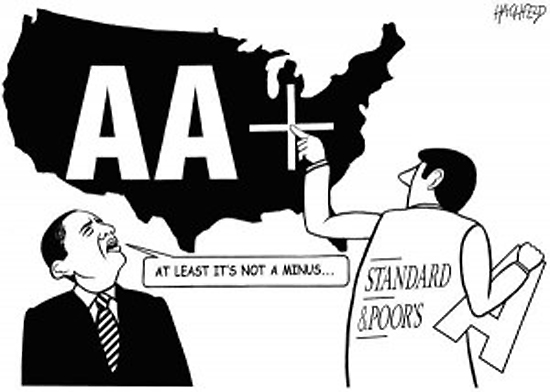 Tea Party Downgrade? Hmm, I thought Obama was in charge...silly me!
by Geoffrey Grider August 8, 2011
NOW THE END BEGINS SHARE:

In the wake of a bruising battle over the debt ceiling and now a first-ever credit downgrade, Democrats have launched a salvo of rhetorical attacks on the Tea Party and appear determined to blame the movement for everything from the debt crisis to the sputtering economy.

Tea Party Downgrade? Hmm, I thought Obama was in charge...silly me!

“I think they’re totally unreasonable and doctrinaire and not founded in reality. I think they’ve been smoking some of that tea, not just drinking it,” former Democratic presidential candidate and Democratic National Committee Chairman Howard Dean said.

The term “Tea Party downgrade” gained currency over the weekend as Democratic leaders took to the airwaves to cast Standard & Poor’s decision to downgrade U.S. credit as a Tea Party-triggered event.

They argue that because the rating agency cited the toxic political environment in its decision, the Tea Party is culpable.

Republicans counter that Standard and Poor’s also cited the country’s failure to tackle its debt problem — something the Tea Party has urged Washington to do. They accuse Treasury Secretary Tim Geithner of lacking a plan to grow the economy, and suggested he resign over his role in the latest turn of events.

“When you open that refrigerator door, the lights don’t come on,” Rep. Allen West, R-Fla., told Fox News. “I don’t think that Timothy Geithner really has a handle on the fiscal situation here.”

The anti-Tea Party talking points didn’t start with the downgrade decision Friday. Senate Democratic Leader Harry Reid and others have been hammering the Tea Party throughout and since the debt-ceiling debate, casting the movement as public enemy No. 1 as Washington enters the next phase of deficit-reduction talks and the 2012 campaign season gets underway.

As Reid told reporters last week, he and his colleagues are worried about the “Tea Party direction of this Congress.” And despite repeated calls for civility, lawmakers are using some heated rhetoric to try and neutralize the Tea Party’s influence.

In a fundraising email last week, Iowa Democratic Sen. Tom Harkin condemned what he described as an effort to “appease the hostage-takers,” saying most Americans “have no use for the Tea Party extremists.” source – Fox News