Flashing the peace sign, Iranian President Mahmoud Ahmadinejad told the UN on Monday that Iran is unconcerned by Israeli threats of attack but prepared to defend itself, adding that... 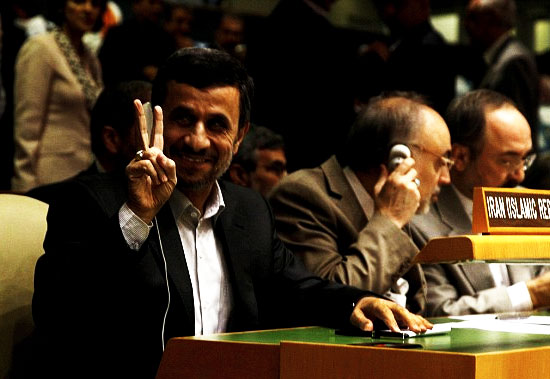 Signs of the times

“For when they shall say, Peace and safety; then sudden destruction cometh upon them, as travail upon a woman with child; and they shall not escape.” 1 Thessalonians 5:3

Flashing the peace sign, Iranian President Mahmoud Ahmadinejad told the UN on Monday that Iran is unconcerned by Israeli threats of attack but prepared to defend itself, adding that Israel has ‘no roots’ in the history of the Middle East and would be ‘eliminated’.

Israeli delegates walked out of conference as Iranian leader spoke

The Iranian president made the remarks as he attended the first full day of the annual UN General Assembly in New York. Israeli delegates walked out of the conference as he began to speak.

Ahmadinejad also said it was not too late for dialogue with the United States to resolve differences.

Israeli Prime Minister Benjamin Netanyahu has hinted Israel could strike Iran’s nuclear sites and has criticized U.S. President Obama’s position that sanctions and diplomacy should be given more time to stop Iran from acquiring nuclear weapons.

Iran denies that it is seeking nuclear arms and says its atomic work is peaceful, aimed at generating electricity.

‘Fundamentally we do not take seriously the threats of the Zionists. … We have all the defensive means at our disposal and we are ready to defend ourselves,’ Ahmadinejad told reporters in New York, where he is due to attend the UN General Assembly.

He refused to speak of the state of Israel by name and instead referred only to the ‘Zionists’, and when asked about author Salman Rushdie he made no attempt to distance himself from recent renewed threats on the author’s life emanating from an Iranian semi-official religious foundation.

He said: ‘If he is in the U.S., you should not broadcast it for his own safety.’

Rushdie, an Indian-born British novelist who has nothing to do with the video, was condemned to death in 1989 by Khomeini, Iran’s late leader, over his novel The Satanic Verses, saying its depiction of the Prophet Mohammad was blasphemous.

Ahmadinejad said this would be his last trip to New York as president of Iran, because his term is ending and he is barred from seeking a third consecutive term. But he did not rule out staying active in Iranian politics and said he might return as part of future Iranian delegations to New York. source – Daily Mail