The November 1 intercept was the first time Tehran had fired at an unmanned American aircraft, in a stark reminder of how tensions between the United States and Iran... 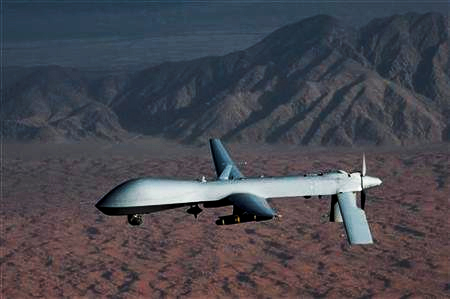 This “incident” was purposely and willfully kept from the America people for a full week before the election and was not made public for a full 24 hours after the election. Obama can do nothing except by deceit, lies and cover-ups. And in typical Obama fashion, he refused to take action against his fellow Muslims. Just like at Fort Hood…just like in Benghazi…just like in Tunisia….

From Yahoo News: WASHINGTON (Reuters) – Iranian warplanes fired at an unarmed U.S. drone in international airspace last week but did not hit the aircraft, the Pentagon said on Thursday, disclosing details of an unprecedented incident that triggered a formal warning to Tehran through diplomatic channels. 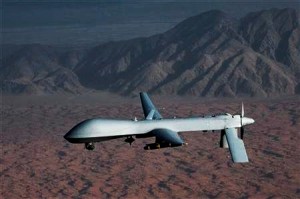 The November 1 intercept was the first time Tehran had fired at an unmanned American aircraft, in a stark reminder of how tensions between the United States and Iran could escalate quickly into violence.

If Iran had hit the drone, as the Pentagon believes it was trying to do, it could have forced American retaliation – with the potential consequences that entails.

According to the timeline provided by the Pentagon, two Iranian SU-25 “Frogfoot” aircraft intercepted the American drone at about 4:50 a.m. EST (0850 GMT) as it conducted a routine, but classified, surveillance mission over Gulf waters about 16 nautical miles off the Iranian coast.

Pentagon spokesman George Little said the aircraft fired multiple rounds at the Predator drone and followed it for at least several miles as it moved farther away from Iranian airspace.

“We believe that they fired at least twice and made at least two passes,” he said.

Defense Secretary Leon Panetta was quickly notified of the incident, as were members of Congress and the White House, Little added. The United States also sent Iran a warning through diplomatic channels, saying it would defend its military assets and would keep sending aircraft on such surveillance operations.

“There is absolutely no precedence for this,” Little said. “This is the first time that a (drone) has been fired upon to our knowledge by Iranian aircraft.”

Many questions about the incident remain, including why Iranian warplanes could not manage – if they wanted – to shoot down an unarmed drone, which lacks advanced capabilities to outmaneuver them.

Asked whether the Iranian aircraft were simply firing warning shots, Little said: “Our working assumption is that they fired to take it down. You’ll have to ask the Iranians why they engaged in this action.” There was no immediate comment by Iranian officials.

President Barack Obama has resisted calls from inside the United States and Israel for military action against Iran, focusing instead on crushing rounds of sanctions, which were tightened again on Thursday.

The United States imposed sanctions on Iran’s communications minister and the Ministry of Culture and Islamic Guidance for jamming international satellite broadcasts to Iran and censoring and closing newspapers and detaining journalists.

The sanctions are part of broader efforts to isolate Tehran, which denies U.S. accusations that it seeks to develop nuclear weapons under the cover of its civilian atomic program. In an effort to drive Iran to compromise, the United States and the European Union have gone for the jugular – Iran’s oil exports – over the past year.

The United States and Israel, which regards a nuclear-armed Iran as a threat to its existence, have also hinted at the possibility of military strikes on Iran as a last resort.

Obama has said the United States will “do what we must” to prevent Iran from acquiring nuclear weapons and has repeatedly said that all options are on the table – code for the possibility of using force. source – Yahoo News