While performing her song “Swine,” the singer was joined by someone named Millie Brown. Brown is an artist of sorts who specializes in painting with…vomit. ... 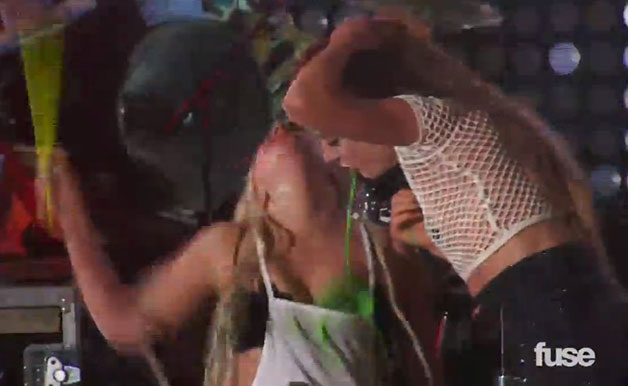 The only thing you can attribute this to is the open manifestation of demons compelling Lady Gaga to carry out this type of disgusting behavior. Hollywood and the music industry has been heading towards open Satanism for quite some time now, and we fully expect this trend to expand and continue.

Equally disturbing is Gaga’s voice as she sings the song in the video below. It is a Satanic, angry growl, declaring that “I won’t follow your rules” which is the essence of the Satanic creed “Do What Thou Wilt”. Jesus said, “not my will but Thine be done”, talking to His Father.

SXSW: Pop star Lady Gaga is known for her shocking outfits and antics. But what she did on stage Thursday night at the South By Southwest festival in Austin, Texas, has left even some of the most desensitized critics calling it “ridiculous” and “sick.”

While performing her song “Swine,” the singer was joined by someone named Millie Brown. Brown is an artist of sorts who specializes in painting with…vomit. That’s right, she ingests colored liquid and then sticks her fingers down her throat and literally vomits all over a canvas. On Thursday, Brown did just that — except there was no canvas: She vomited a green liquid onto Lady Gaga.

Even TMZ, the celebrity gossip site, thought it was too much. “Lady Gaga’s antics are sometimes inducing, but this is ridiculous,” the staff wrote, going on to call it “sick…literally.” source – The Blaze