Regular readers of Now The End Begins are already well aware of the Global Citizen people, they came on our end times radar last year. You will recall we told that Global Citizen is controlling billions of dollars to promote a One World Agenda and last year are used Hollywood satanists like John Legend as frontman on an Illuminati All-Seeing Eye stage set. Yeah, those people. Is anyone surprised to find the evil World Health Organization on the same bill with Global Citizen for the One World concert this weekend? We're not.

When a group calling themselves Global Citizen wants to bring you a One World ‘Together At Home’ concert headlined by a New Age Illuminati satanist like Lady Gaga, it’s not just the end times, it is the end of times.

All of this is taken straight from the inside of an end times novel like ‘Left Behind’, and the forces behind it could not be more obvious about their intentions. Take a long, hard look at the image of Lady Gaga in the main graphic, are you getting the message their sending you? By their own words, it is a One World concert whose headliner is a New Age Illuminati satanist, and it’s being funded by a group called Global Citizen. Dude…srsly? And just so you know, the Lady Gaga pic was taken from official One World ‘Together At Home’ branding. Yep.

“And I stood upon the sand of the sea, and saw a beast rise up out of the sea, having seven heads and ten horns, and upon his horns ten crowns, and upon his heads the name of blasphemy. And the beast which I saw was like unto a leopard, and his feet were as the feet of a bear, and his mouth as the mouth of a lion: and the dragon gave him his power, and his seat, and great authority.” Revelation 13:1,2 (KJB)

Regular readers of Now The End Begins are already well aware of the Global Citizen people, they came on our end times radar last year. You will recall we told that Global Citizen is controlling billions of dollars to promote a One World Agenda and last year are used Hollywood satanists like John Legend as frontman on an Illuminati All-Seeing Eye stage set. Yeah, those people. Is anyone surprised to find the evil World Health Organization on the same bill with Global Citizen for the One World concert this weekend? We’re not. I am fully expecting to see multiple pitches from the performers prompting them to take the vaccine when it is ready, and to accept the digital identification from ID2020. Maybe a cameo or two from Bill Gates. The One World ‘Together At Home’ New World Order music fest will be broadcast this Saturday evening April 18th starting at 8:00 pM EST.

Careful observers will note in the video below that the main icon for Global Citizen is a satanically-inspired swirling red circle, the main image in their marketing is a completely red-covered planet, and the top and bottom open hands over a home imagery is giving your the “as above, so below” found in Illuminati Hollywood and Freemasonry. Take another look at Lady Gaga, a long hard look. Get the message yet?

What is One World: Together At Home?

The UN and the World Health Organization (WHO) asked Global Citizen to support their COVID-19 response by bringing the world together through music and inspiring everyone to take action. With an exceptional group of artists, Global Citizen is now launching One World: Together At Home. 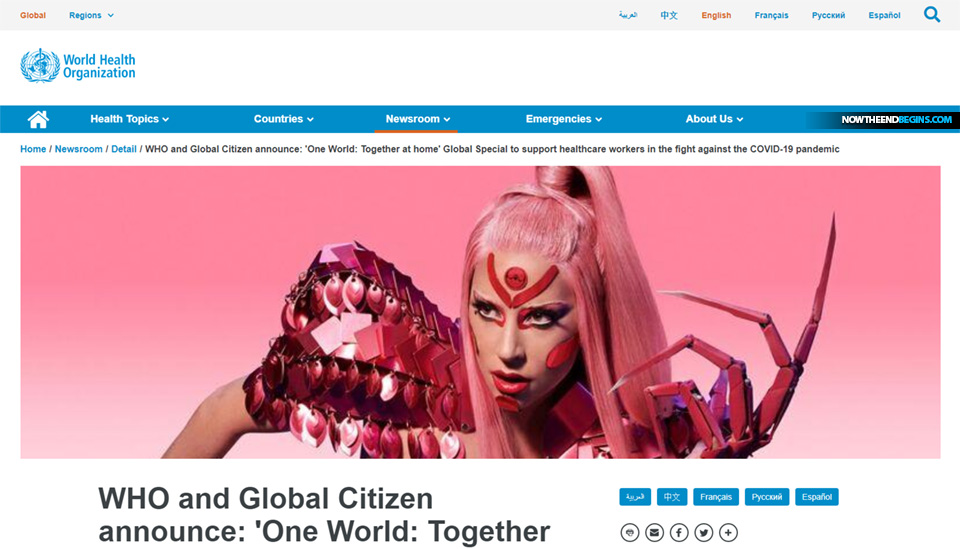 THE END TIMES ARE IN FULL SWING AS YOU CAN CLEARLY SEE FROM THIS OFFICIAL ANNOUNCEMENT FROM THE WORLD HEALTH ORGANIZATION, THE SAME GROUP WHO ALONG WITH BILL GATES WANTS TO VACCINATE AND CHIP YOU.

One World: Together At Home is a historic, cross-platform global special that will celebrate and support healthcare workers and others on the frontlines, and the World Health Organization (WHO) as they lead the fight against the COVID-19 pandemic. The broadcast will include leading global health experts alongside exciting performances by the world’s top artists and comedians. READ MORE