It is only a matter of time before Joel Osteen officially comes out of his own religious closet with full support for the LGBTQ+P for Pedophile community, why else do you think that his Lakewood Church has such a big gay following? They know that, despite his pusillanimous statements that 'homosexuality is a sin' that Joel Osteen is actually a supporter of the LGBTQ+ and has been for sometime. There is no other way to explain his presence at the Lady Gaga filth and perversion show, no way at all.

Megachurch false teacher Joel Osteen and his wife Victoria were among a number of celebrities, including drag queens, actors and music industry personalities, who attended the “SiriusXM and Pandora Present Lady Gaga at the Apollo” concert on Monday night in New York City. The two posed on the carpet for a photograph next to a SiriusXM/Pandora/Lady Gaga backdrop

Joel Osteen has fallen so far down into apostasy that his seared conscience doesn’t even alert him anymore when trouble is on the horizon, such was the case on Monday night at the SiriusXM and Pandora merger event in New York City. Joel and his wife Victoria were in attendance at the Lady Gaga Pride concert featuring drag queens, amazingly foul language and the endless glorification of the LGBTQ+P for Pedophile agenda. It seems that the Osteens had no problems at all attending such an event, which is not surprising considering how they have been creeping ever closer to supporting same-sex marriage.

“And have no fellowship with the unfruitful works of darkness, but rather reprove them. For it is a shame even to speak of those things which are done of them in secret.” Ephesian 5:11,12 (KJV)

It is only a matter of time before Joel Osteen officially comes out of his own religious closet with full support for the LGBTQ+P for Pedophile community, why else do you think that his Lakewood Church has such a big gay following? They know that, despite his pusillanimous statements that ‘homosexuality is a sin‘ that Joel Osteen is actually a supporter of the LGBTQ+ and has been for sometime. There is no other way to explain his presence at the Lady Gaga filth and perversion show, no way at all.

Joel Osteen has graduated, he has moved from merely being a false teacher and preacher of the word of God, to becoming a member in good standing with the Hollywood satanists we constantly warn you about. Lady Gaga calls her followers ‘little monsters‘ and that is exactly what Joel and Victoria Osteen have become. If you can read this article and still happily attend Lakewood Church or listen to his ‘preaching’ online, it is likely you have never been born again.

FROM CHRISTIAN NEWS: “Are you ready to [expletive] party tonight? Are we making history?” Gaga, whose real name is Stefani Germanotta, asked the crowd as she opened the show, according to the New York Daily News. The popular music streaming companies had announced last month that they would be presenting the “special performance” to “celebrate SiriusXM and Pandora coming together as one company.” They also noted that the concert “coincides with World Pride Month, which this year is being celebrated in New York City.” 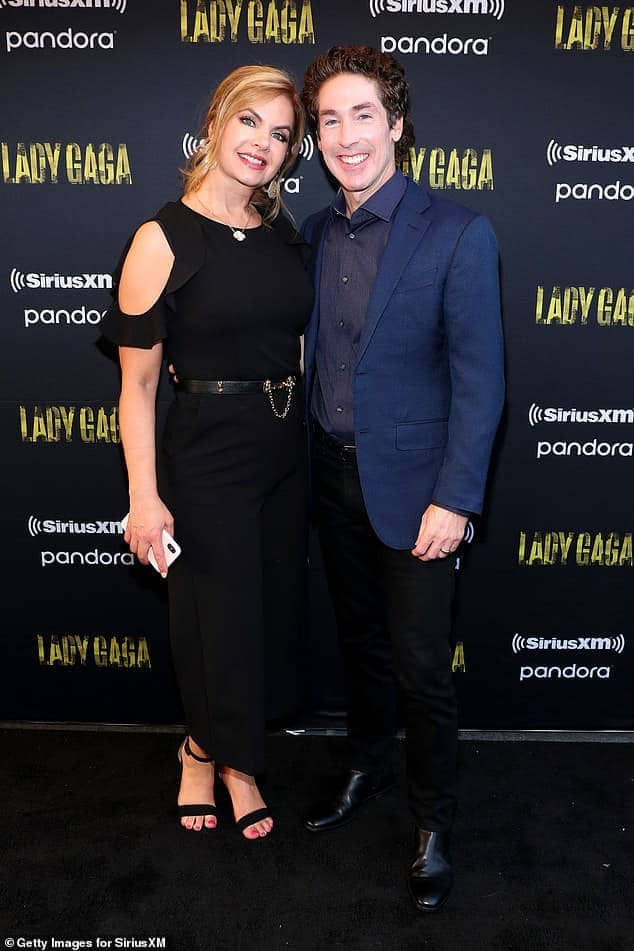 The Daily News reports that Germanotta “performed a selection of her most beloved hits dancing around, in a most homoerotic latex fantasy, dropping F-bombs and getting tips from the future by speaking to an ‘Avatar’-like Gaga figure.”

She also spoke of her advocacy for those who identify as homosexuals and transgenders, telling the crowd, “So, it’s Pride Week. I wish it could exist 365 days of the year, but I’ll take an [expletive] global week.”

Germanotta urged those in the theater and around the world to “[a]sk the question: ‘What is your pronoun?’ Because for a lot of people, it’s really hard, and their pronouns aren’t respected or they’re not asked.”

As previously reported, Germanotta, whose music videos and concerts are often performed in little clothing and are sexually suggestive, sings about homosexuality in her song “Born This Way.”

“A different lover is not a sin, believe capital H-I-M,” the tune claims. “No matter gay, straight or bi, lesbian, transgendered life, I’m on the right track baby, I was born to survive. … I’m beautiful in my way, ’cause God makes no mistakes.”

And in the midst of those photographed were Joel and Victoria Osteen, who posed like the others adjacent to the Pandora/SiriusXM/Lady Gaga backdrop. The Osteens have their own channel on SiriusXM, which according to its description, features “daily messages of hope and inspiration, live call-in shows and with Joel and Victoria, and special live services.” Being connected to the network is likely the reason why they were invited to the event.

Christian News contacted Joel Osteen Ministries to inquire about the appearance, but was told by a representative that she didn’t know anything about the matter as she had just learned of it and that any statement would have to come from Joel himself.

Some outlets expressed bewilderment as to why the Osteens attended since it was assumed that he opposes homosexuality, which Gaga advocates.

As previously reported, Osteen drew criticism in 2013 when he told the Huffington Post that God accepts homosexuals without also mentioning the requirement of repentance.

“You say in your book … ‘It doesn’t matter who likes you or doesn’t like you; all that matters is that God likes you. He accepts you; He approves of you,” host Josh Zepps stated. “Is that true for gay men or true for homosexuals?”

“Absolutely,” Osteen replied. “I believe that God’s breathed His life into every person. We’re all on a journey. Nobody’s perfect.”

“The Bible says that sin is pride, sin is selfish ambition,” he continued. “We tend to pick on certain things, but I believe every person is made in the image of God, and you’ve got to accept them as they are as they’re on their journey.”

Osteen then explained his belief that Christians should exemplify kindness to the world, rather than “pushing people down.”

“Again, the Scripture teaches the way people are going to know His disciples is for our love for one another, and so, I’m not preaching hate [or] pushing people down,” he stated. “I’m not here to tell everybody what they’re doing wrong.” READ MORE

Joel Osteen, who is known for his effervescent personality and sunny disposition in nearly all matters, says he is not cheating people by not preaching about hell.

The number one reason why anyone should ever want to be saved can be summed up in one word – Hell. Because of Hell, Jesus went to the cross and made a payment to set you free if you would only take it. Because of Hell, God commands believers to take the message of salvation to a lost and dying world. What sends you to Hell? Unpaid sin in your life. But Joel Osteen refuses to tell people about Hell because he wants them to be “uplifted” and “feel positive”.

Peter Ruckman Tells the Truth About Heaven and Hell

Let me ask you the most important question you will every be asked in your entire life. If you were to die tonight, where would you go?

“But I will forewarn you whom ye shall fear: Fear him, which after he hath killed hath power to cast into hell; yea, I say unto you, Fear him.” Luke 12:5 (KJV)

Do you know for sure that you would be in Heaven with the Lord Jesus Christ, or is there a nagging doubt that tells you perhaps you are headed in the other direction?