"If you want to believe that Jonah was swallowed by the whale, fine, but don't demand that I believe it too". He then went on to say that saying... 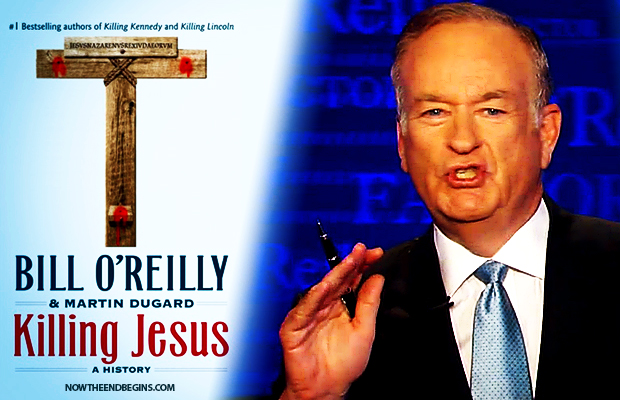 In a few brief sentences, Bill has branded Jesus Christ Himself as a misinformed liar who had no idea what He was talking about.

“For this cause also thank we God without ceasing, because, when ye received the word of God which ye heard of us, ye received it not as the word of men, but as it is in truth, the word of God, which effectually worketh also in you that believe.” 1 Thessalonians 2:13 (KJV)

The bible, as written by God, is a funny book, and will allow you to come to any conclusion you wish to arrive at, based on your belief in Him and in it. But as quoted in the above scripture, without the belief in what God wrote as complete truth, it simply will not work to any effect within you. Belief is the key which unlocks the mysteries of the bible. The more you believe in God’s word, the more His Holy Spirit will open the pages of His word unto you. That said, Bill O’Reilly is not a believer in the bible, as we will show from his own statements.

Killing Jesus? More like slander if you ask me.

Bill O’Reilly is a very smart man by academic standards, and certainly by any worldly measure he has been astonishingly successful. He has become a millionaire many times over on what is arguably the highest-rated cable news show of all time, The O’Reilly Factor. His books are best sellers from the day they are released. Just try matching him in that some time soon, or any time soon. Bill dominates. Totally.

But when it comes to matters of the bible, and what it does or does not say, Bill is lamentably in over his head from the get-go. In defending the new NatGeo television series based on his book “Killing Jesus”, Bill reveals for us in 1:44 seconds that he is not a bible believer and neither is he a bible understander.

In responding to a viewer on his O’Reilly Factor show, he says the following:

“If you want to believe that Jonah was swallowed by the whale, fine, but don’t demand that I believe it too”. He then went on to say that saying Jesus taught Adam and Eve, and Jonah and the whale as literal history is “entirely false, that is wrong, that never happened“.

In a few brief sentences, Bill has branded Jesus Christ Himself as a misinformed liar who had no idea what He was talking about. Why do I say this? Because Jesus said this about the “literalness” of Jonah:

Think about that for a second, Bill. If Jesus is comparing Jonah’s plight in the whale to His journey on the cross, and you say that Jonah never actually entered the whale, then did Jesus mean to say that He never really spent 3 days and night in the ‘heart of the earth’ and pay for our sins? Is Jesus on the cross an allegory as well?

You cannot have it both ways. Something cannot be both an allegory and literal truth at the same time. Does the bible contain allegory? Yes, of course it does. But when you allegorize literal, historical events that occur in the bible, you render them to be untruth. Did an actual Jonah get swallowed by a literal whale? Jesus said he did, Bill O’Reilly says he did not.

The best-selling book and now highly-watched National Geographic mini-series “Killing Jesus” will have two main effects. First, their success will make rich people richer. Secondly, it will weaken the faith of people in the bible by reducing literal, historical, biblical facts into motivational stories that don’t really matter if they are true because they bring a “good message”.

“God forbid: yea, let God be true, but every man a liar; as it is written, That thou mightest be justified in thy sayings, and mightest overcome when thou art judged.” Romans 3:4 (KJV)

Well, memo to you, Bill…if the bible is not 100% true, if the historical accounts in there did not actually happen as the bible says it happened, then it’s the most useless book ever written. If you can say Jonah never got swallowed by the whale, even though Jesus says he did, then on what basis do you then say that Jesus actually went to the cross and literally paid for our sins? Are you now the great arbiter of what the bible really says, and what really did or did not happen within it’s pages?

Bill, you are definitely a patriot, but when it comes to the bible you are also a pinhead. Any time you wish to debate the veracity (our word of the day) of the bible, please contact me.

And that’s the top story…