‘Good Friday’ Is A Roman Catholic Invention, The Bible Says Jesus Went To The Cross On A Wednesday

The Roman Catholic 'Good Friday' timeline is short by nearly two full days, because they fail to see the two Sabbath days that occurred. They only see the one on Saturday. They also fail to understand the Jewish calendar and how their days were set up according to Genesis 1. When you realize that at 6:00 P.M. the current day ends and the new one starts, that changes just about everything. How can your timeline be right when you don't even know what time it is?

The Bible Believer’s Guide To The Crucifixion Timeline Starts On A Wednesday, Not On The Roman Catholic ‘Good Friday’

All over the world this Friday, Christians and Catholics will be observing Good Friday. The Catholic church teaches that Jesus went to the cross on a Friday and rose from the grave on a Sunday morning. It sounds right, and mostly everyone across the board accepts those days and that chronology. Only one problem. It’s completely wrong according to the biblical account of what happened.

The Catholic teaching is based on 1 Corinthians 15:4 which says this:

“And that he was buried, and that he rose again the third day according to the scriptures:” 1 Corinthians 15:4 (KJB)

They count Friday as one day, Saturday as the second day and Sunday as the third day. 3 days. Only it’s not 3 days, it’s barely a day and a half according to the Jewish calendar. Jesus did not rise on Sunday morning, the bible says that He already “was risen” by the time Sunday morning rolled around. Read it for yourself:

“Now when Jesus was risen early the first day of the week, he appeared first to Mary Magdalene, out of whom he had cast seven devils.“ Mark 16:9 (KJB)

“In the end of the sabbath, as it began to dawn toward the first day of the week, came Mary Magdalene and the other Mary to see the sepulchre. He is not here: for he is risen, as he said. Come, see the place where the Lord lay.“ – Matthew 28:1,6 (KJV)

In all the gospel accounts, Jesus is already risen on Sunday morning. There is no account of His rising at that time, it has already happened. So if the Roman Catholic timeline is followed, you would have at the most 30 hours of elapsed time. Not even close enough to the “3 days and 3 nights” that Jesus Himself said would transpire. 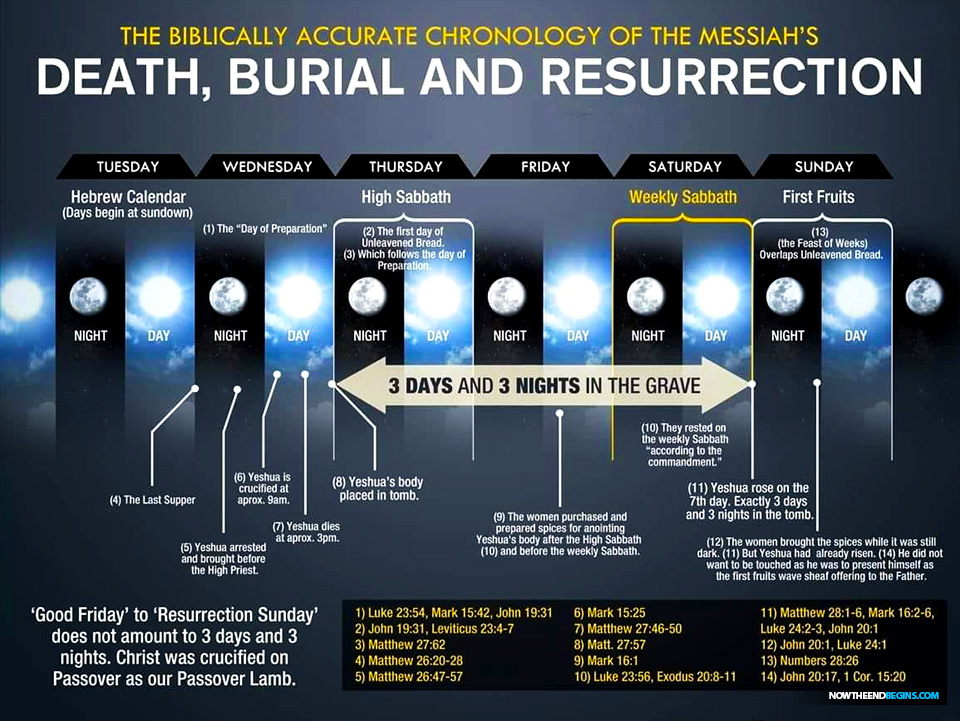 In the first chapter of Genesis, we see God creating our 24 day, made up of 12 hours of “evening”, and 12 hours of “morning. This is exactly how we still chart time here in 2014. But the bible says that God started the day at 6:00 P.M. Make a mental note of that because when we come back to this point in just a bit, you’re going to need to remember it.

Jesus says in Matthew that His crucifixion, death, burial and resurrection would match that of what happened to the prophet Jonah in the Old Testament. Here it is:

There you have it, the required time mandated by Jesus Himself is 3 full days, and 3 full nights. Jesus was crucified on Wednesday morning, and taken down off the cross before sundown at 6:00 P.M. when Thursday would begin. To us that’s still Wednesday night, but the on the Jewish calendar, 6:00 P.M. starts the next day.

“When Jesus therefore had received the vinegar, he said, It is finished: and he bowed his head, and gave up the ghost. The Jews therefore, because it was the preparation, that the bodies should not remain upon the cross on the sabbath day, (for that sabbath day was an high day,) besought Pilate that their legs might be broken, and that they might be taken away.” John 19:31.32 (KJB)

Now please note the phrase “that sabbath day was on a high day”. This is not the regular Saturday sabbath day, it is a special, high sabbath day. What was so special about this “high day”? It was the Passover! This Passover fell on the Thursday and was followed by the days of unleavened bread as found in Leviticus:

Now that you see that the Passover was on a Thursday, the age-old Pascha-Passover controversy has also been solved. In the King James Bible, Acts 12:4 uses the word “Easter” instead of the word “Pascha”, which means Passover. Which is precisely what Luke was referring to, the pagan holiday of Easter on that Saturday, and not the Jewish Passover which had already finished. Acts 12:3 says that Peter was taken during the “days of unleavened bread”, right?

“And because he saw it pleased the Jews, he proceeded further to take Peter also. (Then were the days of unleavened bread.)” Acts 12:3 (KJB)

Well, I just showed you that according to the Old Testament, the “days of unleavened bread” came after the Passover. So in Acts 12: 4, Luke rightly records it as being Easter and not the Passover which had already expired. (See how simple it is when you actually believe what you read where you read it?). Now, let’s get back to those 3 days and 3 nights.

Remember now, in the week Jesus was crucified there are two sabbath days, not only one. You have the high Sabbath day on Thursday, which was the Passover. And you have the regular Sabbath day which fell on Saturday as they do each week at the end of the week. Mark records it this way:

“And when the sabbath was past, Mary Magdalene, and Mary the mother of James, and Salome, had bought sweet spices, that they might come and anoint him. And very early in the morning the first day of the week, they came unto the sepulchre at the rising of the sun.” Mark 16:1,2 (KJB)

Saturday being the last day of the week, the day God rested from all His labors. So as the two Marys coming to see the body and mourn at sunrise Jesus was not “rising”, but rather had already risen.

“And he saith unto them, Be not affrighted: Ye seek Jesus of Nazareth, which was crucified: he is risen; he is not here: behold the place where they laid him.” Mark 16:6 (KJB)

A Quick Review Of The Timeline:

Now we have the fulfillment of Jesus’ prophecy to be ” in the heart of the earth” for “3 days and 3 nights”. The Roman Catholic ‘Good Friday’ timeline is short by nearly two full days, because they fail to see the two Sabbath days that occurred. They only see the one on Saturday. They also fail to understand the Jewish calendar and how their days were set up according to Genesis 1. When you realize that at 6:00 P.M. the current day ends and the new one starts, that changes just about everything.

How can your timeline be right when you don’t even know what time it is?

So while you spend this week observing “Good Friday”, just keep in mind that you’ve already missed the day of His ‘passion’ by two whole days.

That is, if you’re a Bible believer.