Maker of the beloved Frosted Flakes and corporate giant Kellogg's scores a perfect 100% in the workplace when it comes to issues favored by the LGBT Movement. ... 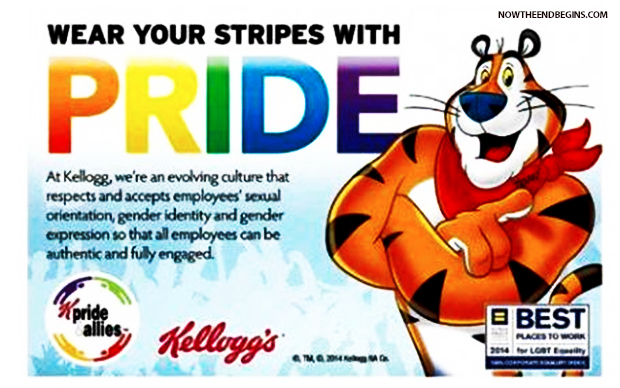 WEAR YOUR STRIPES WITH PRIDE

From the company: “At Kellogg, we’re an evolving culture that respects and accepts employees’ sexual orientation, gender identity and gender expression so that all employees can be authentic and fully engaged.”

According to the Human Rights Campaign website, maker of the beloved Frosted Flakes and corporate giant Kellogg’s scores a perfect 100% in the workplace when it comes to issues favored by the LGBT Movement. Last month, they were also a corporate sponsor of the Atlanta Gay Pride March and festival. The above ad was taken from the American Family Association’s Facebook page.

It won’t be long before LGBT-themed messages and promotions begin appearing on the back of your children’s cereal boxes. Since they cannot replicate, they must indoctrinate, and recruiting of children always seems to be about the best place to start.