The two Israeli men who were killed Saturday evening in a Palestinian terror attack in Jerusalem’s Old City were named by police as Nehemia Lavi, 41, and Aharon Benet,... 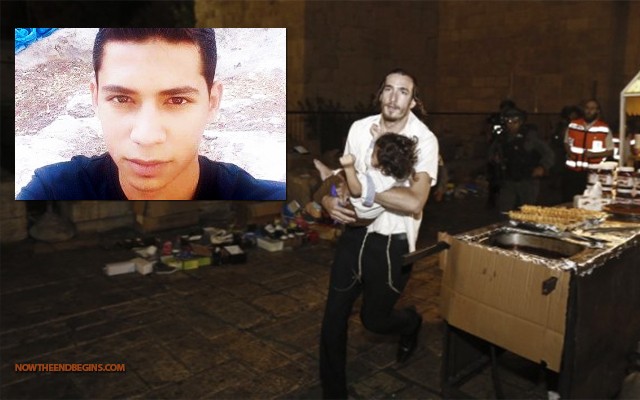 The two Israeli men who were killed Saturday evening in a Palestinian terror attack in Jerusalem’s Old City were named by police as Nehemia Lavi, 41, and Aharon Benet, 22.

The two died of their wounds shortly after being stabbed in Jerusalem’s Old City by a Palestinian terrorist. Benet’s wife is in serious condition and their two-year-old baby was lightly wounded. She was taken to Hadassah Hospital Ein Kerem and is undergoing surgery. The toddler was taken to Shaare Zedek Medical Center for treatment where he remains in stable condition.

Lavi, a Jerusalem resident, leaves behind a wife and seven children. His funeral is scheduled for Sunday at noon at Har Hamenuhot in Jerusalem, also known as the Givat Shaul cemetery. French-born Benet and his family lived in Beitar Illit. Lavi and Benet were stabbed in the upper body and were unconscious when paramedics arrived at the scene.

Muhannad Shafeq Halabi, 19, was identified as the terrorist who killed two Israeli men in their 40s on October 3, 2015 in a stabbing attack in Jerusalem’s Old City. (Israel Police)

Benet was taken to Hadassah Hospital Mount Scopus where he died of his wounds shortly after the attack. Lavi was taken to Shaare Zedek Medical Center where he also died Saturday night. When the attack began, Benet’s wife managed to run and alert a group of Border Police forces nearby who arrived on the scene and shot and killed the attacker.

In video footage that emerged Saturday night after the attack, a woman’s screams can be heard followed by gunshots. The baby was shot in the leg, although it is not yet entirely clear how. Police said the attacker may have grabbed a firearm the father was carrying but it is not clear if he managed to fire it.

The incident occurred near Lion’s Gate in East Jerusalem.

The terrorist was identified as Muhannad Shafeq Halabi, 19, from al-Bireh, near Ramallah in the West Bank. Palestinian Islamic Jihad claimed responsibility for the attack, while Hamas issued a statement praising the “heroic operation.”

“Halabi is a member of Islamic Jihad,” a senior member of the Palestinian terror group told AFP on condition of anonymity, after the group issued a statement hailing the attack and saying it was in response to Israeli “terrorist crimes” against Palestinians.

Saturday’s attack comes just two days after an Israeli couple was gunned down in front of their four young children while driving in the West Bank on Thursday evening. Naama and Eitam Henkin were shot dead by two Palestinian attackers while driving between the settlements of Elon Moreh and Itamar, near the Palestinian village of Beit Furik, close to Nablus.

Their children — aged 9,7, 4 and 4 months — who were in the backseat of the vehicle, were unharmed. source