Former President Jimmy Carter as the keynote speaker at the Islamic Society of North America's 51st annual convention to be held in Detroit's Cobo Center.... 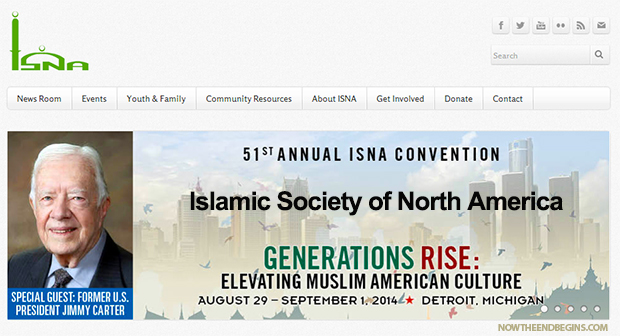 The enemy is always Israel

“Can two walk together, except they be agreed?” Amos 3:3

Have you ever wondered about Jimmy Carter’s legendary appetite for saying and doing things that come against the nation of Israel? Just a few years ago, he wrote a book entitled “Palestine, Peace Not Apartheid” in which he accused Israel of all  sorts of untrue, nasty things. Here’s a quote:

“”When Israel does occupy this territory deep within the West Bank, and connects the 200-or-so settlements with each other, with a road, and then prohibits the Palestinians from using that road, or in many cases even crossing the road, this perpetrates even worse instances of apartness, or apartheid, than we witnessed even in South Africa.””

FOR JIMMY CARTER AND THE LIBERALS, THE ENEMY IS ALWAYS ISRAEL

So it should come as no shock or surprise that Mr. Carter has been chosen to be the paid Keynote Speaker at this year’s ISNA convention to be held in the Sharia Law capital of America, Detroit. From the Toledo Blade newspaper:

The Islamic Society of North America or ISNA, the nation’s largest Muslim group, will hold its 51st annual convention in Detroit’s Cobo Center Friday through Sept. 1, and will feature former President Jimmy Carter as the keynote speaker. President Carter will talk on the subject of his latest book, A Call to Action: Women, Religion, Violence, and Power, at a luncheon Aug. 30.

That night, at a session called “Generations Rise: Elevating Muslim-American Culture” — the same title as the entire conference theme — the outgoing president of ISNA, Imam Mohamed Magid, and four other Muslim speakers will offer ideas for Muslim-American advancement over the next five years. A “secret special guest” is also on the bill.

Do you think that Mr. Carter will discuss the massive abuse of women that takes place in all Muslim majority nations in the Middle East? Perhaps he will talk about the 34 Things About Sharia Law That You Must Know, but somehow I doubt it. We are fairly positive, though, that he will take multiple swipes at Israel either actively or passively. This is far too tempting a venue to not bash Zionism and the Jewish people.

As unimaginable as it is to contemplate in a post-9/11 America, the liberals who populate our government are having a massive love affair with Islamic culture. They have made a house pet out of a rattlesnake, and it will not end well.

The promo for the event drops a tantalizing “secret special guest” for it’s readers to chew on. We are guessing it will be either Joel Osteen or Rick Warren.