A group unveiled an 8-foot-tall bronze statue featuring a goat-headed Satan in Detroit during a gathering that was billed as the “largest public satanic ceremony in history.”... 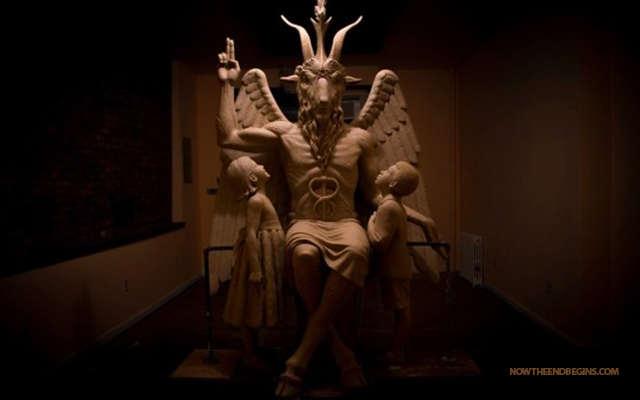 A group unveiled an 8-foot-tall bronze statue featuring a goat-headed Satan in Detroit during a gathering that was billed as the “largest public satanic ceremony in history.”

EDITOR’S NOTE: It is no coincidence that Detroit, the American city with one of the largest Muslim populations, is now also home to the largest monument dedicated to Satan. I think the two go together quite nicely.

DETROIT – Last night the Satanic Temple‘s private event was open only to people with tickets, which sold for $25 each. Invitations to “The Unveiling” summoned guests to prepare for “a night of chaos, noise, and debauchery… Come dance with the Devil and experience history in the making.” The event location was not announced publicly and was known only to those with tickets.

The group said the bronze Baphomet monument, which weighs about one ton and has never been seen before in public, “is not only an unparalleled artistic triumph, but stands as a testament to plurality and the power of collective action.” The statue, which backed by an inverted pentagram and flanked by statues of two young children gazing up at the creature, shows Satan with horns, hooves, wings and a beard.

The group went on to say the unveiling event “will serve as a call-to-arms from which we’ll kick off our largest fight to date in the name of individual rights to free exercise against self-serving theocrats.”

Photography was strictly prohibited at the 18-and-older event unless, of course, you’re a $75 VIP ticket holder. Those partygoers will have an exclusive opportunity to be photographed seated on the Baphomet monument. source