They provide an experience equivalent to watching a 240-inch television at a distance of 10 feet, according to Innovega's chief executive Steve Willey.... 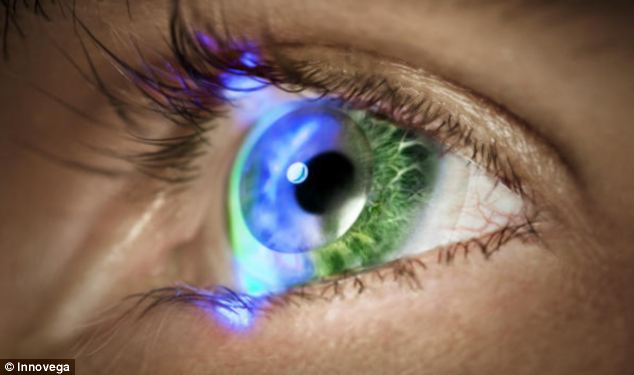 Contact lenses that allow the wearer to see high-definition virtual screens are to be unveiled in Las Vegas next week. Dubbed iOptik, the system allows the users to see projected digital information, such as driving directions and video calls.

RELATED STORY: Mark of the Beast

The tiny ‘screens’, which are the invention of Washington-based group Innovega, sit directly on a users’ eyeballs and work with a pair of lightweight glasses.

Together, they provide an experience equivalent to watching a 240-inch television at a distance of 10 feet, according to Innovega’s chief executive Steve Willey.

The glasses are fitted with micro-projectors and nothing else. The contact lenses, however, are more complicated devices. They can be worn on their own and only function with the iOptik software when a user looks  through the company’s paired glasses.

The system can work with smartphones and portable game devices to deliver video – or switch to a translucent ‘augmented reality’ view, where computer information is layered over the world we know it. 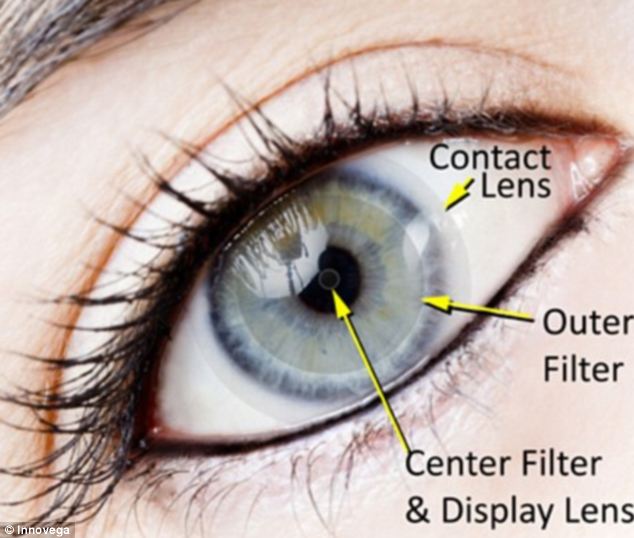 ‘Whatever runs on your smartphone would run on your eyewear,’ Innovega chief Stephen Willey said in an interview with CNET.  ‘At full HD. Whether it’s a window or immersive.’

Crucially, the device can be worn while moving around in a similar way to Google Glass. Innovega customised the standard contact lens manufacturing process with a unique filter to make the contact lenses.

‘All the usual optics in the eyewear are taken away and there is a sub-millimeter lens right in the centre,’ Mr Willey told CNET.

‘The outside of the lens is shaped to your prescription if you need one and the very centre of the lens is a bump that allows you to see incredibly well half an inch from your eye.’

An optical filter also directs the light. ‘Light coming from outside the world is shunted to your normal prescription. Light from that very near display goes through the center of the lens, the optical filter,’ Mr Willey said

The contacts are due to be previewed at the Consumer Electronics Show and promise to provide a much more immersive experience than other head-work wearable devices.

The company unveiled a prototype of the technology at the 2013 Consumer Electronics Show, but plans to show a more advanced, working version next week. source – Daily Mail UK