The Pentagon has placed an order with Innovega for lenses which focus 3D battlefield information from drones and satellites directly into people's eyeballs. The experience is equivalent to a... 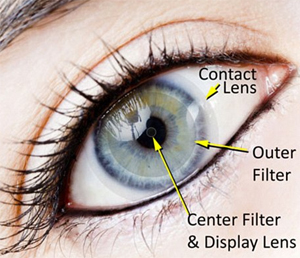 The lenses sit directly on the eyeball, and have been engineered using nanoscale techniques to work as a focusing device that pairs with a pair of hi-tech glasses
by Geoffrey Grider April 13, 2012
NOW THE END BEGINS SHARE:

Lenses can let troops see through ‘eyes’ of drones flying above

The Pentagon has placed an order with Innovega for lenses which focus 3D battlefield information from drones and satellites directly into people’s eyeballs.

The lenses sit directly on the eyeball, and have been engineered using nanoscale techniques to work as a focusing device that pairs with a pair of hi-tech glasses

The tiny ‘screens’ sit directly on users’ eyeballs and work with a pair of lightweight glasses with a built-in translucent screen.

The experience is equivalent to a 240-inch television viewed at a distance of 10 feet, says Innovega’s CEO Steve Willey.

‘Warfighters need to maintain their full vision while on the battlefield,’ says the company. ‘At the same time a tremendous amount of data, graphics and video are collected and are required by specific warfighters in the field.

‘Some is generated from remote cameras, drones, or satellites. Fully transparent video eyewear that is configured into standard issue field glasses would constitute an important step forward. Innovega is actively in partnership to develop this application.’

Crucially, the devices can be worn while moving about – previous bulky ‘VR headsets’ have blindfolded their users and can only be used sitting down.

The effect could be similar to the lenses worn by Tom Cruise in Minority Report.

DARPA – the Defense Advanced Research Projects Agency, thought of as the American military’s ‘mad scientist’ wing – has been funding research on ‘soldier mounted displays’ for some time, but previous versions have been bulky.

The lenses, made with nano-scale engineering processes,work as a hi-tech focusing device, which allows Innovega’s glasses to be considerably less bulky than previous devices. The lenses themselves require no power, and thus can sit safely on the eyeball.

DARPA projects are often oddball technology, but it also has a history of far-sighted technological leaps. DARPA invented the first virtual reality devices, and one of the precursors of the modern internet.

DARPA Says, ‘Innovega’s  iOptiks are contact lenses that enhance normal vision by allowing a wearer to view virtual and augmented reality images without the need for bulky apparatus. ‘Instead of oversized virtual reality helmets, digital images are projected onto tiny full-color displays that are very near the eye.’ These novel contact lenses allow users to focus simultaneously on objects that are close up and far away.’ source – Daily Mail UK