The Huffington Post ran an article yesterday, written by a "licensed minister" Alexander J. Barron, in the "Missionary Baptist" tradition, whose main focal point is that he does... 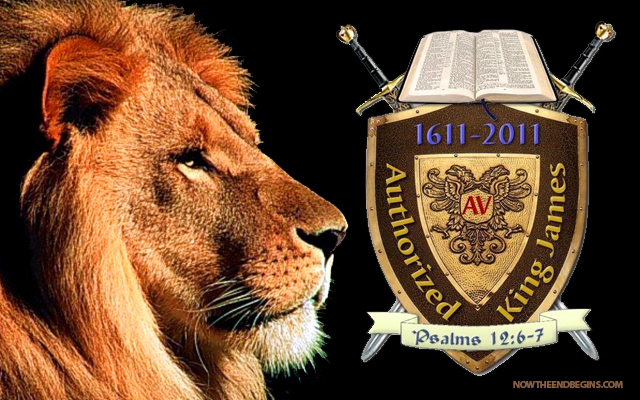 The Huffington Post is the mouthpiece of the Liberal Left and the LGBT Mafia, and as such they are the sworn enemies of Bible believing Christians and the Holy Bible.

“The words of the LORD are pure words: as silver tried in a furnace of earth, purified seven times. Thou shalt keep them, O LORD, thou shalt preserve them from this generation for ever. The wicked walk on every side, when the vilest men are exalted.” Psalms 12:6-8 (KJV)

One of the greatest promises in all the Bible next to passages that deal with our salvation, is God’s absolute and bedrock promise to preserve His words exactly as He spoke them, forever. No matter how wicked this world becomes, no matter the trials we may be going through, we can always count on having access to God’s preserved word as found in the Bible. Whenever I pick up my King James 1611 Authorized Version Holy Bible, I can open to any page I like and know that I am reading the very words of God Himself.

“God, who at sundry times and in divers manners spake in time past unto the fathers by the prophets, Hath in these last days spoken unto us by his Son, whom he hath appointed heir of all things, by whom also he made the worlds;” Hebrews 1:1,2 (KJV)

The Huffington Post ran an article yesterday, written by a “licensed minister”  Alexander J. Barron, in the “Missionary Baptist” tradition, whose main focal point is that he does not believe that the Holy Bible is the infallible word of God, from God, given to man through the Holy Spirit, and preserved by the Same. The many assertions he makes as to why the Bible is not God’s word are quite groundless and immature, and I will waste not one second of the precious life I’ve been given refuting his nonsense. Read it for yourself here. But trying to destroy your faith in the Bible is not his only goal. As you read through his article, you quickly begin to see his real message, and it’s a doozy.

“For the prophecy came not in old time by the will of man: but holy men of God spake as they were moved by the Holy Ghost.” 2 Peter 1:21 (KJV)

Barron states that he is a “Christian that follows the teachings of Jesus of Nazareth, a man, the Lord Savior, and a poor boy born on the chocolate side of Palestine.” In doing so, he drops the “first shoe”. Jesus was born, as God’s Holy Preserved states clearly, in the little town of Bethlehem, located in Israel. Not in some mythical “palestine” which didn’t ever exist. Barron wants you to believe that Jesus Christ is a Palestinian, because that’s Barron’s agenda. He is anti-Israel, anti-Jew, and pro-Palestine which means he is also pro-Muslim. In his official bio, Barron states that he is an avid practitioner of Vipassana, which is New Age meditation and spirit channeling that comes from Buddha.

Spiritually, this man is a mess, and yes, it gets worse.

He drops the “second shoe” when he attempts to prove his case against the Bible by quoting from the “secret teachings” found in the Coptic Gospel of Thomas, not a part of the Holy Bible. The particular verse from Thomas he uses says “”Rather, the kingdom is inside of you, and it is outside of you. When you come to know yourselves, then you will become known, and you will realize that it is you who are the sons of the living father.” Which leads him to the following conclusion: “This scripture repudiates the necessity of an outside entity to validate one’s experience with God. The Bible is a confirmation ground, not a transcript of God speaking to man.” Whew! I think I need a nice, hot washing in the Word of God after wading through all that muck and mire. Click on the video below, speakers on 10, and let some Bible-based preaching clean you up!

That’s My King, Do You Know Him?

The Huffington Post is the mouthpiece of the Liberal Left and the LGBT Mafia, and as such they are the sworn enemies of Bible believing Christians and the Holy Bible. And as hard as it is for me to admit, they unfortunately are the future. God’s word states clearly that in the last days we will be in for a massive spiritual battle.

“This know also, that in the last days perilous times shall come. For men shall be lovers of their own selves, covetous, boasters, proud, blasphemers, disobedient to parents, unthankful, unholy, Without natural affection, trucebreakers, false accusers, incontinent, fierce, despisers of those that are good, Traitors, heady, highminded, lovers of pleasures more than lovers of God; Having a form of godliness, but denying the power thereof: from such turn away.” 2 Timothy 3:1-5 (KJV)

Prepare yourselves, Christian, and be ready for what comes next, but know this. God has preserved His Holy Word for us, so keep it close to you at all times, drink it in, lean on it, depend on it, and let God speak to you through it.