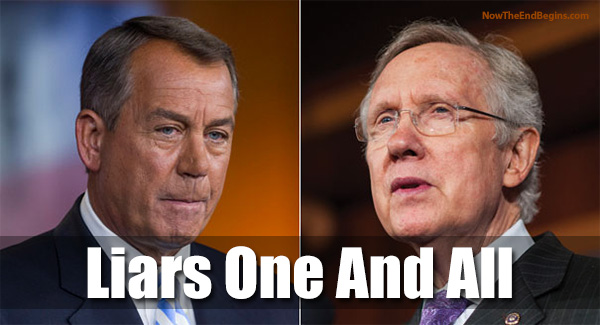 If you haven't yet figured it out, both side of the aisle are equally corrupt. Your vote is meaningless, and the fatcats get fatter as they laugh at the stupidity of the American people in closed-door meetings behind our backs
by Geoffrey Grider February 12, 2014
NOW THE END BEGINS SHARE:

Before the House voted to raise the debt ceiling without any spending reductions or restorations of the military pension cuts Tuesday, House Minority Leader Nancy Pelosi (D-CA) reportedly warned her members not to act like Seattle cornerback Richard Sherman and taunt the “mediocre” GOP leadership for caving.

According to the Washington Post, though Pelosi remained coy before the vote about whether she could deliver enough Democrats to pass the the clean debt increase, behind closed doors Pelosi and her lieutenants “instructed rank-and-file members, ‘don’t gloat, take it in stride and hang together.'”

If you haven’t yet figured it out, both side of the aisle are equally corrupt. Your vote is meaningless, and the fatcats get fatter as they laugh at the stupidity of the American people in closed-door meetings behind our backs

In the end, House Speaker John Boehner (R-OH) and House Majority Leader Eric Cantor (R-VA) were among only 28 Republicans who voted with 193 Democrats on the clean debt ceiling hike. Treasury Secretary Jack Lew had insisted that the debt ceiling be raised by February 27 if the nation did not want to face default.

House Republicans had always insisted any increase in the debt ceiling be accompanied by “spending cuts and reforms in equal or greater amount to the increase.” However, after Boehner decided to reverse course Monday and not even tie the restoration of cuts to veterans’ pensions to the increase in the debt ceiling before Tuesday night’s vote. Breitbart News Washington Editor Jonathan Strong simply wrote, “The Boehner Rule, RIP.” Earlier in the day, the House passed a bill to restore the pension cuts for military veterans by a 360-90 vote and sent it to the Senate for further consideration.

The debt ceiling bill will also go to the Senate, and Sen. Ted Cruz (R-TX) said Tuesday evening that he will object to raising the debt ceiling by a simple majority, which would allow the 55 senators that vote with Democrats to pass the bill without one Republican vote.

Cruz said that since the “debt ceiling has proven the most effective leverage for reining in spending” on at least 28 occasions in which “Congress has attached meaningful conditions to debt ceiling increases,” he intends to “object to any effort to raise the debt ceiling on a 50-vote threshold.”

“I will insist instead on a 60-vote threshold, and if Republicans stand together we can demand meaningful spending restraint to help pull our nation back from the fiscal and economic cliff,” Cruz said.

Cruz noted that Obama is asking for “yet another blank check to keep increasing our debt without doing anything to reform Washington’s spending problem,” even though the national debt has increased from $10 trillion to $17 trillion under him.

“If you ask anybody outside of Washington whether we should keep increasing the debt ceiling without fixing the underlying problem of out-of-control spending, the answer is, ‘of course not,'” Cruz said. “This answer cuts across party lines and ideology – outside the Beltway, Republicans, Democrats, Independents, and Libertarians all agree that living within your means is basic common sense. And yet Washington is not listening to the American people.” source – Breitbart