The Michigan chapter of the Council on American-Islamic Relations yesterday provided cultural awareness training to employees at a Home Depot store in Dearborn, Mich. ... 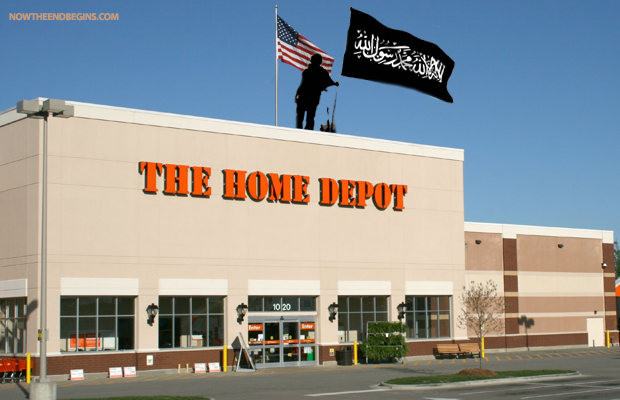 The rapidly encroaching stain of Sharia Law in America expanding

“And he will be a wild man; his hand will be against every man, and every man’s hand against him; and he shall dwell in the presence of all his brethren.” Genesis 16:12

CAIR is a terrorist organization with terror ties that will knock your eyes out. Since 9/11, CAIR associates have been indicted multiple times on terrorism-related charges. Now this same group has demanded and received from home improvement giant Home Depot that it’s employees be subjected to “muslim cultural awareness sensitivity training”. Look at the bright orange of the Home Depot logo, and then remind yourself what ISIS forces their beheading victims to wear when they are executed and you will begin to get the picture.

CAIR-MI has provided similar trainings in the past to other Home Depot locations in Southeastern Michigan.

“We welcome such opportunities to engage Home Depot and other business establishments to better serve their Muslim customers and accommodate the cultural competency of their Muslim employees,” said CAIR-MI Executive Director Dawud Walid.

CAIR has helped resolve a number of similar cases involving prayer in the workplace and offers a booklet, called “An Employer’s Guide to Islamic Religious Practices,” to help corporate managers gain a better understanding of Islam and Muslims. Here are a few nuggets from it:

Friday is the day for congregational worship, called Jum’ah. The prayer generally takes place at a mosque during the noontime prayer and includes an address or sermon, and lasts a total of 45 to 90 minutes.

Performing the rituals of the pilgrimage may last five days during the second week of the twelfth month of the lunar calendar. However, considerable variations exist in trip arrangements, and group travel may take 10-21 days. Muslim employees may choose to make pilgrimage using vacation time.

Employers may wish to modify dress code policies so that religiously-mandated attire is addressed as a diversity issue. For example, many corporations have a policy forbidding the wearing of “hats.” This rule may be amended to exempt items such as head scarves and skullcaps.

A Muslim employee should not be asked to serve or sell religiously offensive products, such as alcoholic beverages