CAIR has a long history of affiliation with the terrorist groups Hamas and Hezbollah. Ilhan Omar will be keynoting with Hassan Shibly, the executive director of CAIR-Florida, who is vehemently anti-Israel, believes that Hezbollah and Hamas are not terrorist organizations and is known for openly discriminating against LGBTs.

Congresswoman Ilhan Omar is slated to speak next month at a benefit for CAIR, the Council on American Islamic Relations, known for supporting terrorist organizations that have acted against Israel and the United States.

Though she has been in office only a few months now, Muslim congresswoman Ilhan Omar is setting new land speed records for the amount of damage being done in an amazingly short time span. In just 3 short months, Ilhan Omar has attacked the Jews and Israel not just one time, but a second time as well. Her fiery condemnation of the Jews prompted Congress to hastily draft an anti-semitism bill to contain the damage she caused. On top of that she is also outwardly in support of the anti-semitic BDS Movement as well as warning that she plans to institute a ‘radical Progressive agenda‘ which is seen by many as a front for Sharia Law. Suffice to say, she has been one, crazy busy Islamic congresswoman. And as the old 1970’s television commercial used to say, “but wait, there’s more!”

“Freedom is never more than one generation away from extinction. We didn’t pass it on to our children in the bloodstream. It must be fought for, protected, and handed on for them to do the same, or one day we will spend our sunset years telling our children and our children’s children what it was once like in the United States where men were free.” Ronald Reagan

The Muslim pro-terror group CAIR has selected her as one of two keynote speakers for their annual banquet taking place next week. The fact that Omar would agree to speak at an event like this at any time is beyond troubling, but to do it after a 3 month spree of virulent anti-semitic remarks and comments is breathtaking. Omar is sending a message, but is America listening?

America is right now, as you read this, under attack from elements seeking her destruction. The Liberals, Progressives, and Democratic Socialists are all joining together in their quest to destroy the United States, and the Sharia Law muslims are along for the ride. Think of it as finishing what Barack Hussein Obama started. And if you think that America cannot be taken over legally by Islamic forces, then you probably haven’t been to London lately.

Ilhan Omar is stocked to the gills, and ready for conquest. Does America have the guts to stop her and her allies before it’s too late? Please look in the mirror when asking that question. ISIS may have surrendered in Syria, but Islam certainly has not. Next up…Battleground America with ballots instead of bullets.

FROM THE JPOST: CAIR has a long history of affiliation with the terrorist groups Hamas and Hezbollah. CAIR members have often defended the actions of Hamas in Gaza. The event, scheduled for March 23 in Los Angeles, is entitled “Advancing Justice, empowering Valley Muslims.” 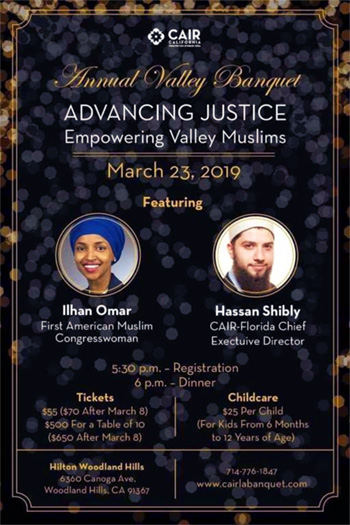 Further, FBI investigators uncovered evidence establishing CAIR’s place in the “Palestine Committee,” which was a Muslim Brotherhood-created network aimed at helping Hamas in the United States, according to a report by the Investigative Project on Terrorism. In 2009, US District Court Judge Jorge Solis ruled that there is “at least a prima facie case as to CAIR’s involvement in a conspiracy to support Hamas.”

Moreover, the organization was officially designated a terrorist organization by the United Arab Emirates in 2014, placing it in the company of Al Qaeda, Islamic State and others.

Omar will be keynoting with Hassan Shibly, the executive director of CAIR-Florida, who is vehemently anti-Israel, believes that Hezbollah and Hamas are not terrorist organizations and is known for openly discriminating against LGBTs.

In 2014, Shibly claimed that the Hamas terror tunnels uncovered in Operation Protective Edge in the northern Gaza Strip were “being used in the defense of Palestine.”

At the time, he wrote that “to Israel, every tunnel – be it one that brings food into an impoverished Gaza Strip where over half of the population depends on food aid, or one that delivers sheep to a Khan Yunis farmer who lost his other farm animals to a prior Israeli incursion – is a “terror tunnel.” Following the attacks in 2015, Ayloush suggested that the US was “partly responsible” for the ISIS-led attack on innocents in California.

“Let’s not forget that some of our own foreign policy – as Americans, as the West – has fueled that extremism,” he added.  Ayloush has in the past described US military operations in Iraq and Afghanistan as part of a campaign to instill “fear of the Muslims.”

The revelation of Omar’s upcoming address comes after a major Twitter storm in which she accused the American Israel Public Affairs Committee (AIPAC) of paying American politicians to be pro-Israel.

Omar received heavy backlash for the comments and was accused of antisemitism, with leaders on both the Right and Left condemning her remarks. Just a few days later, she was also caught up in a controversy over whether or not she would be speaking alongside an official known for his antisemitic comments at an emergency gala dinner for Yemen on February 23 in Tampa, Florida.

It was revealed that she would give the keynote address at an Islamic Relief USA dinner alongside Yousef Abdallah, who has advocated for violence against Jews and expressed antisemitic sentiments on his social media pages. Omar’s PR team pushed back and the event’s marketing materials and online invitations were changed. They claimed that it was a clerical error and that she was never set to speak alongside Abdallah in the first place. READ MORE

This Is How They Want You To See Her

This Is How She Really Is