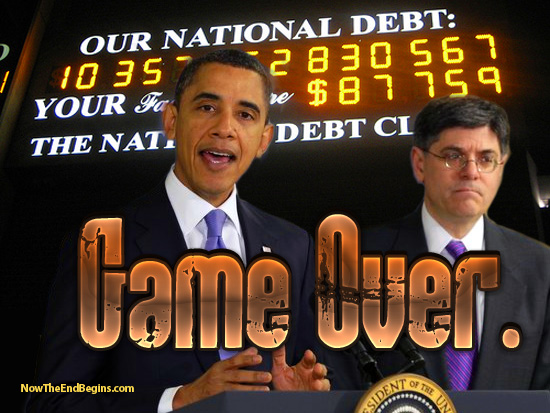 Look at the amount on the debt clock on this photo form a year ago, and see how many more trillions in debt we've acquired under Obama
by Geoffrey Grider August 8, 2011
NOW THE END BEGINS SHARE:

And the walls came tumblin’ down

S&P cut the long-term debt rating for the U.S. by one notch to AA+ from AAA late Friday. The move wasn’t unexpected, but it comes when investors are already feeling nervous about a weak U.S. economy, European debt problems and Japan’s recovery from its March earthquake.

Look at the amount on the debt clock on this photo from a year ago, and see how many more trillions in debt we've acquired under Obama

Speaking on the downgrade issue at the White House Monday, President Barack Obama said the U.S. will always be a AAA-rated country despite what rating agencies say, and he urged lawmakers to work together to tackle the nation’s deficit.

The Dow Jones industrial average was lately down over 400 points, adding to a loss of over 200 points at the start of trading. The mid-morning slump in stock prices came as S&P downgraded the credit ratings of mortgage lenders Fannie Mae and Freddie Mac and other agencies linked to long-term U.S. debt. source – MSNBC