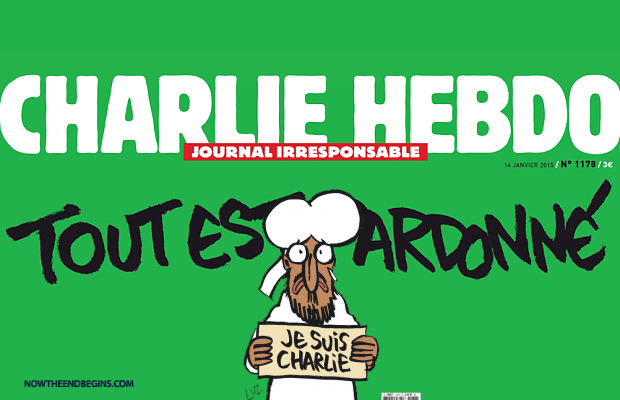 The special issue, to come out on Wednesday, will also be offered "in 16 languages" for readers around the world, one of its columnists, Patrick Pelloux, said.
by Geoffrey Grider January 13, 2015
NOW THE END BEGINS SHARE:

This week’s three million copies of Charlie Hebdo, the first post-attack issue of the French satirical weekly, will defiantly feature caricatures of the Prophet Mohammed, its lawyer said Monday.

Paris, France– Charlie Hebdo’s lawyer, Richard Malka, told French radio the upcoming publication will “obviously” lampoon Mohammed — among other figures — to show staff will “cede nothing” to extremists seeking to silence them.

The special issue, to come out on Wednesday, will also be offered “in 16 languages” for readers around the world, one of its columnists, Patrick Pelloux, said.

The two gunmen who slaughtered 12 people in their attack on Charlie Hebdo’s offices last Wednesday, including five of its top cartoonists and three other staff members, claimed as they left the scene that they had “avenged the Prophet Mohammed”.

The 44-year-old newspaper has always sought to break taboos with its provocative cartoons on all religions, current events and prominent personalities.

The paper’s distributors, MLP, had initially planned to print one million copies of the issue currently being put together by survivors of the shooting. Publishing director of the satyric weekly Charlie Hebdo, Charb, displays the front page of the newsp …

But MLP said demand from France and abroad has been huge and that three million copies would now be released. The original paper printed at 60,000 copies a week, selling 30,000. source