Europe has a very serious Muslim problem, and it's not going away any time soon. Expect many more to be slaughtered to the satanic taunts of Allahu Akbar! as... 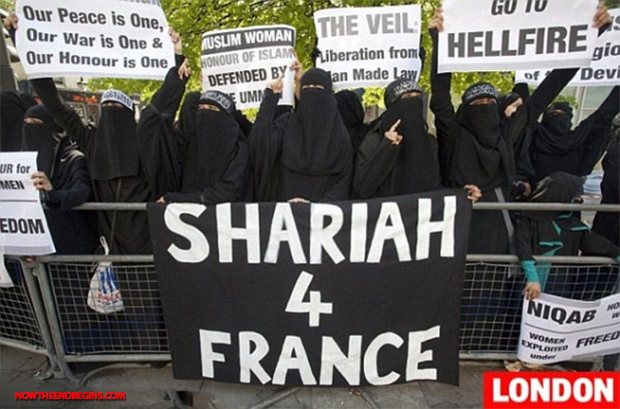 When was the last time you heard of an incident of terrorism, anywhere in the world, that was not perpetrated by Muslims? Seriously, think about it for a minute. For every one non-Muslim terror attack you can mention, I can right now give you 500 cases where it was Muslims who did the killing and terrorizing.

The website The Religion Of Peace records that in December 2014, there were 233 events of Jihad attacks in over 30 countries, resulting in 2,497 dead bodies with 2,225 injured to whatever degree. Please place this information side-by-side with any episodes of non-Muslim terror attacks you may know of. We will be happy to publish your findings in a follow-up story.

Yesterday, the world recoiled in horror at the mass slaughter in France of Charlie Hebdo, his employees, and two police officers who were mercilessly killed as the demonic cry of Allahu Akbar! rang out in the streets. The Muslim god was thirsty and only blood would satisfy his needs. Yet, less than 24 hours after that, a female police officer would be shot in the face and killed, with several others seriously injured.

Europe has a very severe Muslim problem, how they deal with it will likely determine it’s collective future.

For many years now, the Muslim population in England has been swelling and expanding. As they do in all countries where they have a large number, Muslims there are demanding that England follow Sharia Law. Incidents of Islamic terror attacks in England have skyrocketed, English politicians have already started to give concessions in the pathetic hope of appeasement. The spirit of Neville Chamberlain is a hard one to get past, apparently. Things have gotten so bad there, that patriot groups like Britain First have been formed to do what the English Parliament refuses to do. England is in a battle for it’s very existence, and they refuse to recognize it. In Germany, a group called PEGIDA is sounding the alarm against the creeping Sharia that has begun to bloom there.

“One of the problems of Europe today is it is surrounded by regions, in North Africa, the Balkans, the Middle East where these dirty entanglements of corruption, crime and terrorism interact in such a potent way to destabilize the societies,” Louise Shelley, a professor at George Mason University in Virginia, told Bloomberg Television.

Muslims, unlike any other group of people, never seek to simply quietly assimilate into the lands in which they travel. They build their numbers, and as soon as they do, seek to exert their will over their host country. I cannot think of any other group of people who do that. There are millions of Jews living in America, I have yet to see a rally or protest where they demand anything. My grandfather, an immigrant from Ireland, came here in 1923. The Irish arrived by the millions and helped to build this nation to what it is today. When did the Irish demand anything other than fair treatment?

Europe has a very serious Muslim problem, and it’s not going away any time soon. Expect many more to be slaughtered to the satanic taunts of Allahu Akbar! as the blood runs in the streets.

To our brothers and sisters in France, all of America mourns with you. Fight for your nation, or expect to lose control of it.