Flat Broke! UK Gov’t Says That They Are OUT OF MONEY

“The British Government has run out of money because all the money was spent in the good years,” the Chancellor said. “The money and the investment and the jobs... 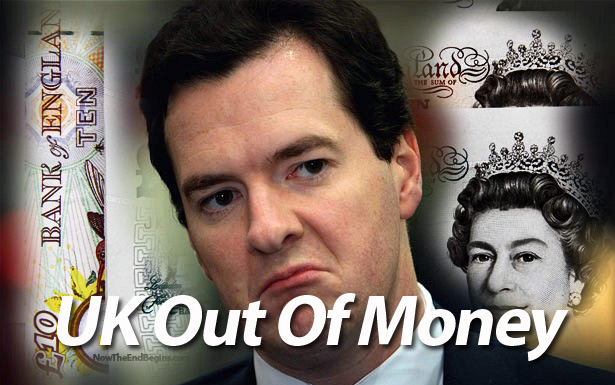 The Chancellor was speaking as finance ministers from the world’s 20 most powerful economies met in Mexico.
by Geoffrey Grider February 27, 2012
NOW THE END BEGINS SHARE:

In a stark warning ahead of next month’s Budget, the Chancellor said there was little the Coalition could do to stimulate the economy.

The Chancellor was speaking as finance ministers from the world’s 20 most powerful economies met in Mexico.

Mr Osborne made it clear that due to the parlous state of the public finances the best hope for economic growth was to encourage businesses to flourish and hire more workers.

“The British Government has run out of money because all the money was spent in the good years,” the Chancellor said. “The money and the investment and the jobs need to come from the private sector.”

Mr Osborne’s bleak assessment echoes that of Liam Byrne, the former chief secretary to the Treasury, who bluntly joked that Labour had left Britain broke when he exited the Government in 2010.

Mr Osborne is under severe pressure to boost growth, amid signs the economy is slipping back into a recession.

The Institute of Fiscal Studies has urged him to consider emergency tax cuts in the Budget to reduce the risk of a prolonged economic slump. source – Telegraph UK