It's finally happened: Facebook exceeded 1 billion users. "This morning, there are more than one billion people using Facebook actively each month," he said. "Helping a billion people connect... 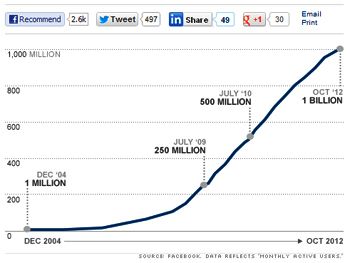 Topping the 1 billion mark means that Facebook now reaches one out of every 7 people on the planet.
by Geoffrey Grider October 5, 2012
NOW THE END BEGINS SHARE:

Topping the 1 billion mark means that Facebook now reaches one out of every 7 people on the planet.

“This morning, there are more than one billion people using Facebook actively each month,” he said. “Helping a billion people connect is amazing, humbling and by far the thing I am most proud of in my life.”

Topping the 1 billion mark means that Facebook now reaches one out of every 7 people on the planet.

The ubiquitous social media giant that was famously created in a Harvard dorm room hasn’t had much trouble attracting new members.

While its growth in North America and Europe has leveled off, Facebook continues sucking in new users throughout Asia and the developing world. It has a presence in more than 200 sovereign territories, according to stats tracked by All Facebook, which draws on data Facebook provides to advertisers, and an empire that stretches from a mere 20 users in Vatican City to more than 166 million in the United States.

It took Facebook six years to hit the 500 million user mark and barely two to double it. Facebook’s total membership grew nearly 30% over the past year, but in hot regions like Brazil, its membership doubled. (Sorry, Orkut.)

From a money-making standpoint, not all of those users are created equal.

Less than 20% of Facebook’s users live in the U.S. and Canada, but those users account for 48% of the $992 million in advertising revenue that Facebook took in last quarter. Facebook makes an average of $3.20 each quarter in revenue off its North American users, versus just 55 cents from those in Asia. source – CNN Money