Take a look at the green stuff in your wallet and prepare to say goodbye to it in the future: By 2020, most Americans will be using their... 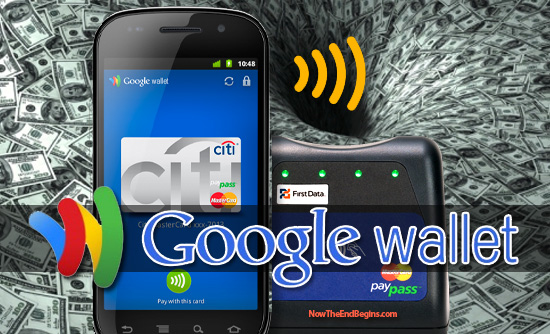 You are seeing the very short-term immediate future of how transactions will take place - cashless.
by Geoffrey Grider April 17, 2012
NOW THE END BEGINS SHARE:

Related Story: The Mark of the Beast

Take a look at the green stuff in your wallet  (if you have any) and prepare to say goodbye to it in the future: By 2020, most Americans will be using their cellphones, not cash or credit cards, to make payments.

You are seeing the very short-term immediate future of how transactions will take place - cashless.

That’s what 65 percent of the 1,021 tech experts surveyed by Pew Research Center’s Internet & American Life Project and the Imagining the Internet Center at Elon University said is likely to be the case, with consumers not only adopting, but embracing, the use of “smart-device swiping” for purchases.

“So many people are already accustomed to buying a cup of coffee with a credit card that smart-device swiping is only a very small next step,” John Pike, director of GlobalSecurity.org, told Pew in its report, “The Future of Money in a Mobile Age.”

Already, many of us are using our smartphones to pay for a variety of goods and services, including renting movies via iTunes or Netflix, or buying e-books from Amazon. More than one third of smartphone owners have used their phones to check their bank balance or to pay a bill, according to Pew.

A Federal Reserve report in March found that 21 percent of cellphone owners used mobile banking services in the previous year, and another 11 percent plan to do so in the next 12 months, Pew said. Among those users, 12 percent said they’ve used their phone to access their bank account to pay bills or transfer money to another person’s account.

Mobile payment technologies are in the early stages in the U.S. among manufacturers: Google is among those leading the way with its Google Wallet partnership with Citibank and MasterCard, using near-field communication. The technology allows for very short-range communication between devices, such as a phone and a payment terminal. Google Wallet has only been available in the U.S. on the Nexus S phone, which has a built-NFC chip.

Wireless carriers Verizon, AT&T and T-Mobile have joined with credit card companies American Express, MasterCard and Discover, to develop a similar NFC program called “ISIS” that will be tested in pilot cities around the country mid-year. Google chief economist Hal Varian told Pew that while the year 2020 might be “a bit optimistic” for majority adoption of pay-via-phone, he’s sure it will happen.

“What is in your wallet now? Identification, payment, and personal items. All this will easily fit in your mobile device and will inevitably do so.”

Security remains a key issue for users. In one example so far, Google Wallet was recently cited by a security firm for a flaw that let the firm crack Google Wallet’s PIN code. Google contended that firm “disabled the security mechanisms that protect Google Wallet by rooting the device. To date, there is no known vulnerability that enables someone to take a consumer phone and gain root access while preserving any Wallet information such as the PIN.”

Pew noted that “in addition to potential concerns about the security and privacy of mobile payments and cloud storage of financial information, wide-scale usage of mobile payments may be slowed by the simple desire for anonymity” that the use of cash offers. And, as one anonymous respondent told Pew, cash may still remain king for many, because in a world of mobile payments, ” … if you run out of batteries, you temporarily run out of money.” source – MSNBC Technolog