EYEWITNESS TO HISTORY: Meet Aubrey Temples, The WWII Soldier And POW Who Saw Adolf Hitler Get On A Plane And Escape Germany On April 30th, 1945

Aubrey M. Temples was a WWII D-Day & Market Garden 82nd Airborne paratrooper, a POW in Germany, and a two time Purple Heart recipient, who saw Adolf Hitler face to face in Nussdorf, Germany on the morning of April 30, 1945, the day Hitler was supposed to have committed suicide in Berlin. Temples watched him board the plane and fly away.

THE INCREDIBLE, BUT ABSOLUTELY FACTUAL, STORY OF A WORLD WAR II AMERICAN POW, WHO GIVES A FACE TO FACE, EYEWITNESS ACCOUNT OF ADOLF HITLER’S ESCAPE FROM GERMANY ON THE VERY DAY HE WAS SUPPOSED TO HAVE COMMITTED SUICIDE IN BERLIN.

As the son of a father of German Dutch ethnicity who served in the Air Force during WWII, I grew up being fascinated by the stories and accounts of the Second World War. Having German ancestry, I was equally fascinated with the exploits of that personification of evil, Adolf Hitler, and the rise of Nazi Germany.

In all the accounts I have read over the past 40 years or so, I have never quite believed that Hitler killed himself in his bunker that day in April, 1945. He was too much of a coward to pull that trigger, and had grown far too accustomed to a lavish lifestyle made possible by all the treasure he stole from the Jews. I have read many interesting accounts of Hitler escaping to Argentina, but none of the stories I read had that all-important element, an actual eyewitness who saw Hitler escape with their own eyes. That is until right now. Meet Aubrey Temples.

Aubrey M. Temples was a WWII D-Day & Market Garden 82nd Airborne paratrooper, a POW in Germany, and a two time Purple Heart recipient, who saw Adolf Hitler face to face in Nussdorf, Germany on the morning of April 30, 1945, the day Hitler was supposed to have committed suicide in Berlin.

Aubrey Temples had no reason to lie about his story, he never made any money from it. But before we go further, take a moment to listen to his account, taped before his death, and decide for yourself if you think he is telling the truth. Here now is that interview:

This video clip features a WWII veteran, a two-time Purple Heart and two-time Bronze Star With Valor recipient, Aubrey Temples. As a POW, he came face to face with Hitler on April 30, 1945, the day he and Eva Braun supposedly committed suicide in the Berlin bunker.

Now that you’ve seen the video, you must admit it is compelling testimony. Aubrey, though advanced in years, was bright, focused and mentally sharp in recounting his story of seeing Hitler board the plane. Here is another tantalizing piece of evidence showing that Aubrey did indeed file that report he mentioned in the video, and sent it to General Eisenhower. 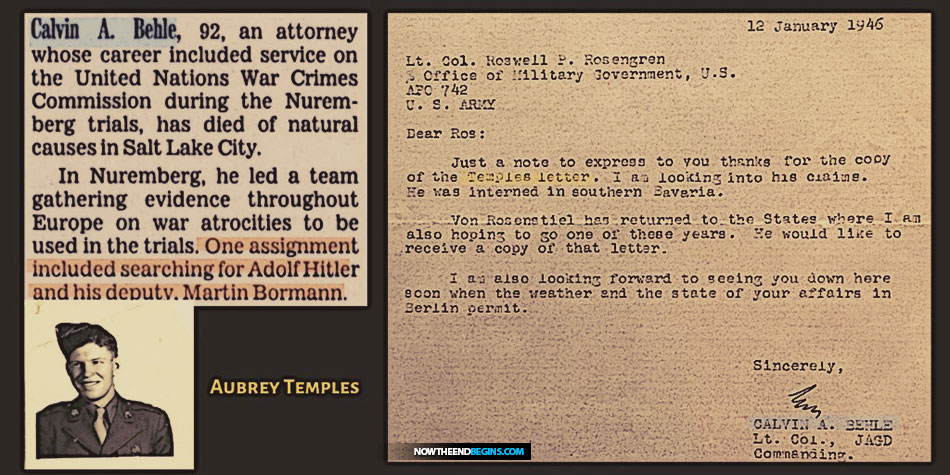 TEMPLES CLAIMED HE IMMEDIATELY SENT A NOTE TO HIS SUPERIORS OF WHAT HE SAW, THIS LETTER PROVES HE DID

Remember, this is not conspiracy theory of any kind, this is a decorated WWII soldier’s memory of being on the ground in Nussdorf, Austria the day he saw Hitler. You will remember that Hitler was born in Austria, so it makes perfect sense that his own people who take him in and shield him as the Nazi reich was collapsing.

The FBI probed the possibility that Adolf Hitler escaped his Berlin bunker on April 30, 1945, declassified documents have revealed. The papers explore the possibility the Nazi leader made it to Argentina in a German U-boat two weeks after he reportedly shot himself dead. In 1960, 15 years after Hitler’s death, former US President Dwight Eisenhower was photographed in the same city speculated to be his hideout. 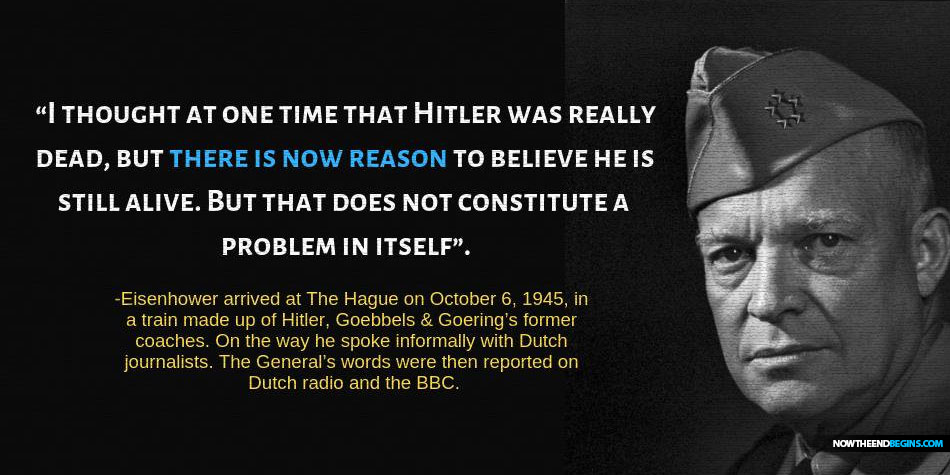 We have reached out to Aubrey’s son in law, Lewis Robinson III, hoping to obtain an interview for our radio show. We will keep you posted as that develops. In the meantime, I believe Aubrey’s story, and find it to be quite credible. I have never accepted the narrative that Adolf Hitler died in his bunker, as there was never any proof. Remember when Obama claimed to have ‘killed Bin Laden‘, yet was unable to provide one single bit of photographic evidence to prove it? That’s because it never happened.

No one ever found the dead body of Hitler at his bunker, and there was not a single nation, Russia and the United States included, that believed Hitler died that day. For if they did, why did they search for Hitler for years afterward? All evidence has always pointed to the fact that Adolf Hitler escaped Germany, US paratrooper Aubrey Temples said he watched him get on that plane on the very day Hitler was supposed to be dead in his bunker. Whom do you believe?

Hitler killed himself with his wife Eva Braun in his bunker in 1945 right? Think again. In UNILADs brand new series Insight, we meet investigative journalist Gerrard Williams, known for his appearances on History channels ‘Hunting Hitler’ and his book ‘Grey Wolf: The Escape of Adolf Hitler’.

INTERESTING SIDE NOTE: In the country of Chile, there is an enormous compound that was created by Nazis who escaped Germany after WWII. Today, the children and grandchildren of those Nazis have turned this former haven for war criminals into a lush resort dedicated to German life and culture, it’s called Villa Baviera, and you can visit them here.

When you contribute to this fundraising effort, you are helping us to do what the Lord called us to do. The money you send in goes to the overall daily operations of this site. When people ask for Bibles, we send them out at no charge. When people write in and say how much they would like gospel tracts but cannot afford them, we send them a box at no cost to them for either the tracts or the shipping, no matter where they are in the world. Even all the way to South Africa. We even restarted our weekly radio Bible study on Sunday nights again, thanks to your generous donations.