''In fact,'' Warren added, ''as a member of the Council on Foreign Relations and Oxford Analytica, I might know as much about the Middle East as you.'' No sooner had I received this surprising response from Warren, I also got an email providing a link to a YouTube video of Rick Warren in Syria explaining how great the Assad regime treats Christians and Jews and how Damascus ''does not permit extremism of any kind.''

WASHINGTON – Rick Warren, the superstar mega-church pastor and bestselling author of ”The Purpose Driven Life,” had a Damascus Road experience last week – and like Saul of Tarsus, one of the after-effects appears to be blindness. 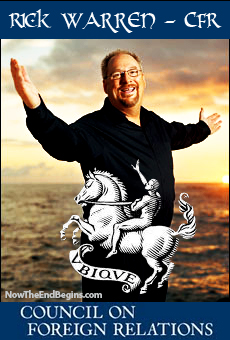 Despite the temporary loss of vision that prevented him from seeing any evil in the totalitarian police state, Warren’s hearing was apparently not affected – for his ears were tickled by what he heard and apparently accepted lock, stock and barrel from the second-generation dictator, Bashar Assad, and his state-approved mufti.

But that’s not the story Warren is telling – at least not in the official press releases he is sending out from Rwanda in response to my confrontations with him last week in which I accused him of betraying his own country in a hostile foreign land and of being a propaganda tool of the Islamo-fascist regime in Damascus.

In fact, after I called him out last week in my column, Warren e-mailed me claiming to have been misquoted by the official Syrian news agency.

”Joseph, why didn’t you contact me first and discover the fact that I said nothing of the sort?” he pleaded. ”The trip was a favor to my next door neighbor, had nothing to do with policy, and was done with the State Department’s knowledge – who told us to expect exactly what Syria did – a PR blast. I don’t pretend to be a diplomat. I’m a pastor who just gets invited places.”

I pointed out to Warren that WND had indeed attempted to contact him about his trip. No one from his Saddleback Church ever returned our calls the day the story broke.

”I’m sure since you were warned in advance by the State Department that you took the precaution of recording your own words,” I suggested in my response. ”We look forward to seeing the transcripts or hearing the recordings.”

I also asked if he could respond specifically to the words put in his mouth by the Syrian news agency. And lastly I suggested that he should have ”counseled with me, or other people knowledgeable about the Middle East before doing so much damage with your reckless trip.”

I really didn’t expect to hear back from Warren – but, a few minutes later, I did, with an absolutely stunning retort.

He let me know he is a close friend of President Bush ”and many, if not most, of the generals at the Pentagon.” He also told me he did not tape anything while in Syria, ”because it was a courtesy call, like I do in every country.” Warren explained that he had also counseled with the National Security Council and the White House, as well as the State Department, before his little courtesy call for a neighbor.

”In fact,” Warren added, ”as a member of the Council on Foreign Relations and Oxford Analytica, I might know as much about the Middle East as you.”

He continued: ”I hope you’ll not choose to believe Syrian propaganda even though, as you pointed out at the start of your article, you’ve been wanting to criticize me for some time. In spite of your rush to judgment, I think you write great, insightful columns. You are almost batting 1,000.”

No sooner had I received this surprising response from Warren, I also got an email providing a link to a YouTube video of Rick Warren in Syria explaining how great the Assad regime treats Christians and Jews and how Damascus ”does not permit extremism of any kind.”

Not one to let lies go unchallenged, I wrote back to Warren with a link to the YouTube video: ”If you didn’t tape anything, what’s this? Do you really believe Syria does not allow extremism of any kind? There are more terrorist organizations based in Syria than anywhere else in the world!”

It might be that Rick Warren, deep in the bush of Rwanda, never received those last questions, because he never responded – at least not in the last three days.

He did, however, within minutes make sure the YouTube video he recorded independent of his meetings with the Syrian brown shirts was removed from the network. Vanished. Kaput. Sterilized. Cleansed. Stay tuned for more on Rick Warren’s ”Agenda-Driven Life” in the coming days – sponsored, of course, by the Council on Foreign Relations. source – Joseph Farah/WND