Documents confirmed that city officials were kept in the dark about the tests. The Cold War cover story was that the Army was testing smoke screens to protect cities... 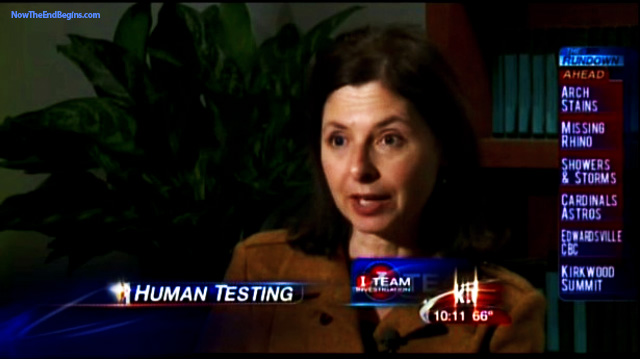 Many people have said to me that the reason why chem trails cannot be true because there is no way that the United States government would intentionally poison their own people. You are about to have that myth shattered into a million, tiny pieces.

Lisa Martino-Taylor is a sociologist whose life’s work has been to uncover details of the Army’s ultra-secret military experiments carried out in St. Louis and other cities during the 1950s and 60s.

“The study was secretive for reason. They didn’t have volunteers stepping up and saying yeah, I’ll breathe zinc cadmium sulfide with radioactive particles,” said Martino-Taylor.
Army archive pictures show how the tests were done in Corpus Christi, Texas in the 1960s. In Texas, planes were used to drop the chemical. But in St. Louis, the Army placed chemical sprayers on buildings and station wagons.

Documents confirmed that city officials were kept in the dark about the tests. The Cold War cover story was that the Army was testing smoke screens to protect cities from a Russian attack. The truth, according to Martino-Taylor was much more sinister.

“It was pretty shocking. The level of duplicity and secrecy. Clearly they went to great lengths to deceive people,” she said. By making hundreds of Freedom of Information Act requests, she uncovered once-classified documents that confirm the spraying of zinc cadmium sulfide.

Martino-Taylor says the greatest concentration was centered on the Pruitt-Igoe housing complex, just northwest of downtown St. Louis in the Carr Square neighborhood. It was home to 10,000 low income people. An estimated 70 percent she says were children under the age of 12.

“This was a violation of all medical ethics, all international codes, and the military’s own policy at that time,” said Martino-Taylor.

In 1994, then-Congressman Richard Gephardt (D-St. Louis), asked the Army to open its records and explain the St. Louis testing. At the time Rep. Gephardt said, “We want to make sure nothing went on that would harm anyone, and that all the fact are out on the table.”

Documents released in the 90s showed the Army placed sprayers on a former Knights of Columbus building on Lindell and in Forest Park. The Army always insisted the chemical compound was safe. Martino-Taylor believes documents prove otherwise.

“There is a lot of evidence that shows people in St. Louis and the city, in particular minority communities, were subjected to military testing that was connected to a larger radiological weapons testing project,” she said. For the first time, she links the St. Louis testing to a company called US Radium, a company notorious for lawsuits involving radioactive contamination of its workers.
“US radium had this reputation where they had been found legally liable for producing a radioactive powdered paint that killed many young women who painted fluorescent watch tiles,” said Martino-Taylor. While the Army admits it added a florescent substance to the zinc cadmium compound, details of whether it was radioactive remains secret. Documents uncovered to date indicate the Army never conducted follow-up studies to see whether the compound caused long term health issues.

In 1972, after years of crime, poverty, and decline, the government destroyed the Pruitt -Igoe housing complex.