Are Chemtrails and Morgellons To Blame For Mystery Illness Epidemic In New York?

Sufferers of the mystery illness describe a variety of symptoms, including fatigue, erupting sores, crawling sensations on their skin and - perhaps worst of all - mysterious red, blue...

Possibly related? A CDC study on Morgellons concluded the disease exists only in the patients' minds. Sufferers of the mystery illness describe erupting sores, and crawling sensations on their skin
by Geoffrey Grider February 3, 2012
NOW THE END BEGINS SHARE:

The chemtrail conspiracy theory holds that some trails left by aircraft are actually chemical or biological agents deliberately sprayed at high altitudes for purposes undisclosed to the general public in clandestine programs directed by government officials. 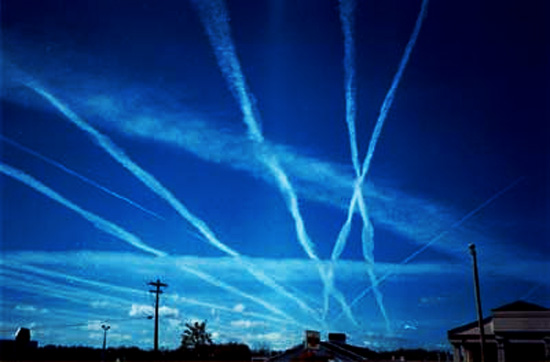 On almost a daily basis you can look up at the sky and see chemtrails just like these. Have you ever wondered what caused them?

Official agencies have received thousands of complaints from people who have demanded an explanation. The existence of chemtrails has been repeatedly denied by scientists around the world, who say the trails are normal contrails. The United States Air Force states that the theory is a hoax which “has been investigated and refuted by many established and accredited universities, scientific organizations, and major media publications”.

The term chemtrail is derived from “chemical trail”, in the similar fashion that contrail is a portmanteau of condensation trail. It does not refer to other forms of aerial spraying such as crop dusting, cloud seeding, skywriting, or aerial firefighting. The term specifically refers to aerial trails allegedly caused by the systematic high-altitude release of chemical substances not found in ordinary contrails, resulting in the appearance of characteristic sky tracks. Supporters of this conspiracy theory speculate that the purpose of the chemical release may be for solar radiation management, population control, weather control, or biological warfare/chemical warfare and claim that these trails are causing respiratory illnesses and other health problems. source – Wikipedia

Mystery Illness on the rise in New York

A 36-year-old nurse practitioner has been diagnosed as the first adult to have the mysterious Tourette-like illness that has spread across a rural New York town.

Marge Fitzsimmons, who works with developmentally disabled patients and has no immediate ties to the town’s high school at the centre of the outbreak, has had to stop going to work because her body tics and twitches have gotten so severe that she can no longer work with her patients.

Details of her condition emerged today as researchers offered a new explanation for the strange symptoms that have been diagnosed in 14 teenage girls and one teenage boy. School administrators would not disclose exactly what they think the cause is but have insisted it is not a case of mass hysteria and that none of the girls are making the illness or symptoms up.

Possibly related? A CDC study on Morgellons concluded the disease exists only in the patients’ minds. Sufferers of the mystery illness describe erupting sores, and crawling sensations on their skin

A new study released by the Centers for Disease Control concluded that Morgellons – a disease that causes patients to sprout painful sores – exists only in the patients’ minds, much like early hypotheses that the Le Roy teenagers suffered from ‘mass hysteria.’

Sufferers of the mystery illness describe a variety of symptoms, including fatigue, erupting sores, crawling sensations on their skin and – perhaps worst of all – mysterious red, blue or black fibers that sprout from their skin. Earlier this month, the school held a forum for concerned parents. About 150 people attended, demanding to know what was wrong with the students. source – Daily Mail UK