Fourth grade students in Dupo, Illinois assigned to reading a Common Core approved biography of President Barack Obama are being told that all white voters were unlikely to vote... 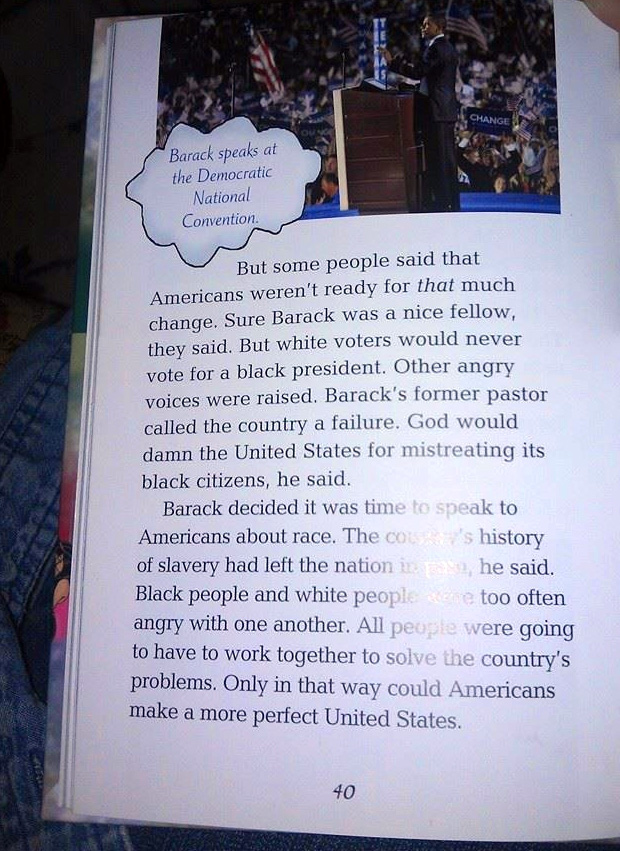 Red Flag News: How can any parent allow their children to be taught racism in the public school system is beyond comprehension. Yet here it is live in Dupo, Illinios. How do you feel about this? Is this the truth? Is this how the new Common Core Standards are going to create even greater social disorder? Could this take the “Knockout Game” being practiced by Black youths around this country to a whole new level? There were plenty of “White” people who have voted for Obama, why would The United Nations Common Core Teaching Standards teach racism against “White” people?

Fourth grade students in Dupo, Illinois assigned to reading a Common Core approved biography of President Barack Obama are being told that all white voters were unlikely to vote for a black president due to racism.

Children at Bluffview Elementary who have been assigned to read the book, entitled “Barack Obama,” published by Lerner Publications and a part of Scholastic’s “Reading Counts” program, were informed on page 40 that despite Obama being a “nice fellow,” many allegedly believed that no white American would vote for him in 2008 based solely on the color of his skin.

“But some people said Americans weren’t ready for that much change. Sure Barack was a nice fellow, they said. But white voters would never vote for a black president,” the book reads.

The book, approved for children as young as seven years old, also goes on to specifically mention controversial comments made by President Obama’s former pastor Jeremiah Wright, while also claiming that the president has worked to bring whites and blacks together. click to read the rest of this story on Red Flag News